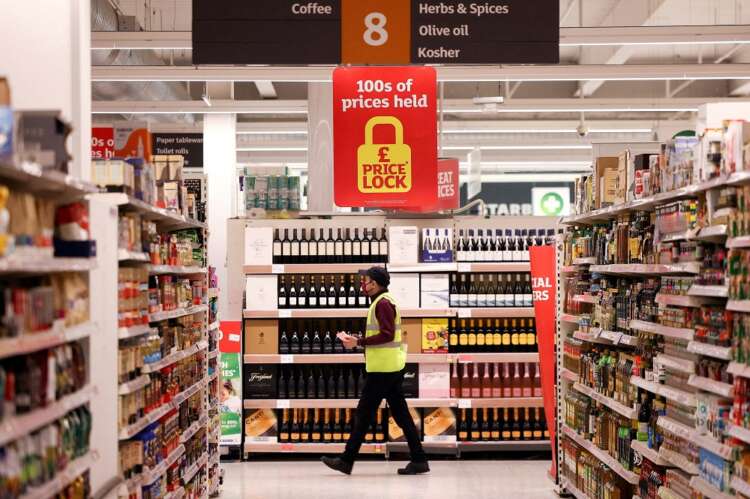 LONDON (Reuters) -Sainsbury’s, Britain’s second largest supermarket group, has set aside a further 50 million pounds ($61 million) to keep a lid on prices, taking a hit to its margin as it absorbs some of the pain of a worsening cost-of-living crisis.

Both Sainsbury’s and market leader Tesco have warned of a drop in profit this year as soaring inflation raises their costs, hurting their margins, while at the same time hitting shoppers’ spending power.

Britain’s supermarkets are generally not passing on to consumers all of the cost price inflation they are seeing which is lowering their profits.

Sainsbury’s said its latest investment in the prices of daily essential items and festive products would take its two-year total to more than 550 million pounds.

The group says it is raising prices less than the wider grocery market. It says it is cutting costs at a faster rate than competitors, giving it more firepower to battle inflation.

Britons’ household incomes are being squeezed by inflation which hit a 41-year high of 11.1% in October.

Based on industry data, UK grocery inflation hit 14.7% in October.

Supermarket groups typically try to keep down the prices of so-called known-value items, which are familiar to shoppers, while pushing up other prices.

Sainsbury’s said 15 million pounds of the additional 50 million pounds would go on festive products, with a Christmas roast dinner of turkey, vegetables and all the trimmings, plus a dessert, cheaper than last year at below four pounds a head.

Last month, Sainsbury’s, whose shares have fallen 19% this year, maintained its full-year outlook.