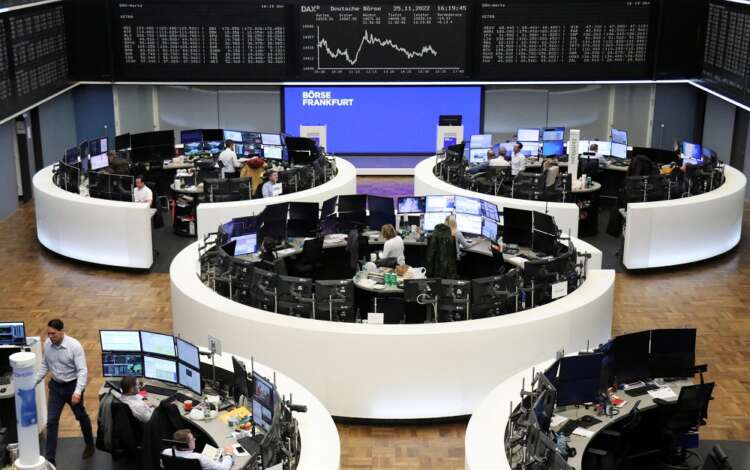 By Susan Mathew and Devik Jain

(Reuters) – European shares fell back on Friday after two days of strong gains that helped the STOXX 600 index notch up its seventh straight week of rises amid signs of China re-opening its economy and easing worries about interest-rate hikes.

The pan-European index closed 0.2% lower after rallying 1.5% in the last two sessions. The index gained 0.6% over the week, and registered its longest weekly winning streak since April 2021.

Energy and technology <.SX8P> stocks were among the biggest drags on the broader index, offsetting gains in real estate and retailers.

“There appears to be some profit-taking after sessions characterised mostly by risk-on appetite. Optimism towards the economic reopening in China has helped drive gains,” Victoria Scholar, head of investment at Interactive Investor, said.

Chinese officials this week softened their stance on strict COVID curbs that have hit global growth amid protests in the country. [MKTS/GLOB]

“Strong job creation and a big increase in wages underscore the Federal Reserve’s argument that a lot more work needs to be done to get inflation under control,” James Knightley, chief international economist at ING, said in a note.

“It has certainly jolted the market. But with recessionary fears lingering, market participants will remain sceptical over how long the strong performance can last.”

Data this week from Europe showing cooling inflation and falling German retail sales and exports have also made the case for the European Central Bank to opt for a smaller hike.

However, ECB Vice-President Luis de Guindos said on Friday the central bank needs to focus on bringing inflation down to its 2% mid-term goal and therefore keep raising interest rates despite a recent deceleration in the pace of price rises.

Among individual stocks, French drugmaker Sanofi fell 1.9% after saying that if it bid for biotech company Horizon Therapeutics Plc, it would do so in cash.

Horizon, with a market capitalization of about $18 billion, is also in talks with Amgen Inc and Johnson & Johnson unit Janssen Global Services over potential takeover offers.

Credit Suisse jumped 9.3% after 12 straight days of losses that sent the stock to a record low. The Swiss lender is looking to speed up cost cutting as the revenue outlook worsens.