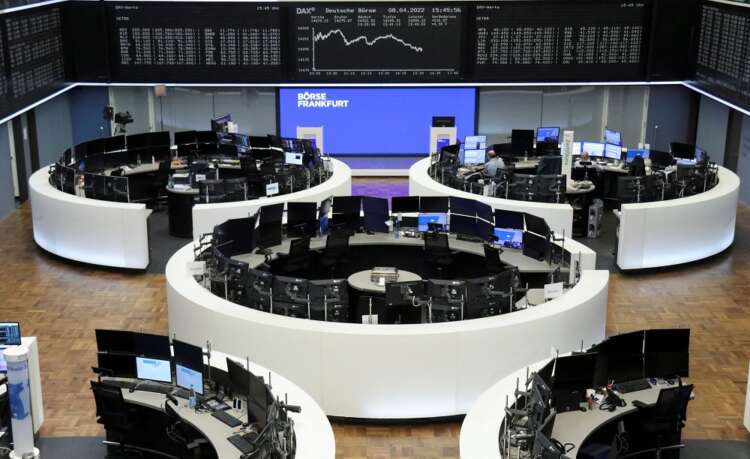 (Reuters) -European shares fell on Tuesday to their lowest in nearly a week as Deutsche Bank and Commerzbank slumped after a big stake sale, while investors awaited U.S. inflation data that could spur bets of bigger interest rate hikes.

Deutsche Bank and Commerzbank fell 9.8% and 8.4%, respectively, after an undisclosed investor sold stakes of more than 5% in Germany’s top lenders.

Appetite for shares was further dented as U.S. yields continued to surge ahead of inflation data that is expected to show consumer prices in the world’s largest economy rose the most in four decades.

After a strong rebound from March lows, the STOXX 600 has been stuck in a range on worries about the fallout of the Ukraine war, aggressive rate hikes by the Federal Reserve to tame inflation and rising coronavirus cases in China.

“While we have high inflation, company margins are pretty stable at the moment. Equities are somewhat of a hedge in the current inflationary environment so I’m not overly concerned.”

Stocker warned that there are risks of a 5% selloff in European equities but overall earnings should be supportive.

U.S. quarterly earnings season is set to begin this week with Wall Street banks. In Europe, the reporting season will kick into high gear later this month, with analysts’ predicting a 19.9% rise in profit for STOXX 600 companies, as per Refinitiv data.

China-exposed luxury stocks such as LVMH, Kering and Hermes dropped in the range of 1% and 2% as China faced its worst COVID-19 outbreak in two years.

Oil & gas stocks stayed afloat as crude prices rose after falling below $100 a barrel in the previous session. [O/R]

(Reporting by Sruthi Shankar in Bengaluru; Editing by Arun Koyyur)