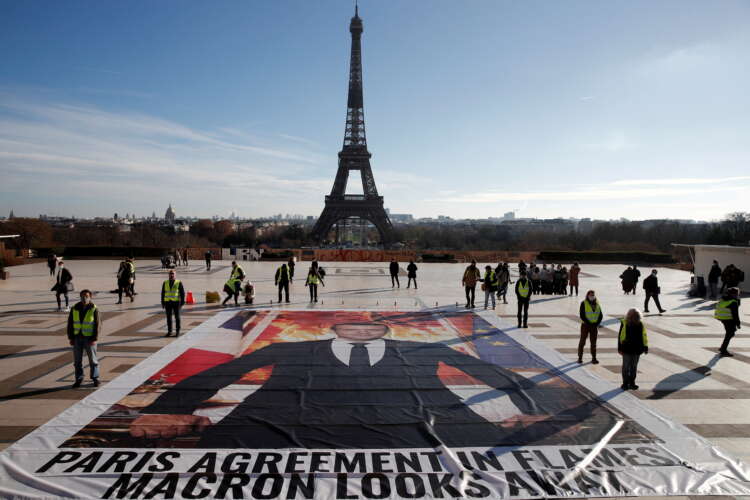 PARIS (Reuters) – Activists disrupted a green finance summit in Paris on Tuesday, saying that French President Emmanuel Macron had failed to get serious on investing in combating climate change.

Macron’s government says it is committed to meeting its climate targets, including going carbon neutral by 2050, in line with the 2015 Paris Agreement on climate change.

Le Maire said he supported allocating tax revenues from fossil fuels to finance the transition to a greener economy, an idea the government has flagged since early in Macron’s mandate.

“If we guarantee that every euro of tax revenue on petrol, diesel, gas and fuel oil will be allocated … to the fight against global warming, I am convinced that will facilitate financing the ecological transition and make the tax system more acceptable,” Le Maire said.

About 18 activists set off alarms and chanted ‘Your finance, our lives’, while in a nod to Greta Thunberg https://www.reuters.com/world/europe/protests-proposals-activists-face-climate-talks-test-2021-09-28, they complained of the “blah, blah” rhetoric they said was coming from Macron’s government, echoing the words of the environmental campaigner at a pre-COP26 event https://www.reuters.com/business/cop in Italy last month.

A French court this month ordered the state to honour its promises on climate change, insisting it take measures to repair ecological damage and to prevent a further increase of carbon emissions by the end of December 2022 at the latest.

Macron’s government, which is due to attend the COP26 meeting in Glasgow, Scotland next month, was fined 10 million euros ($12 million) by France’s highest administrative court in August for failing to improve air quality.

France and several other countries have pushed to label nuclear energy as green investments in the European Union’s upcoming sustainable finance rules.