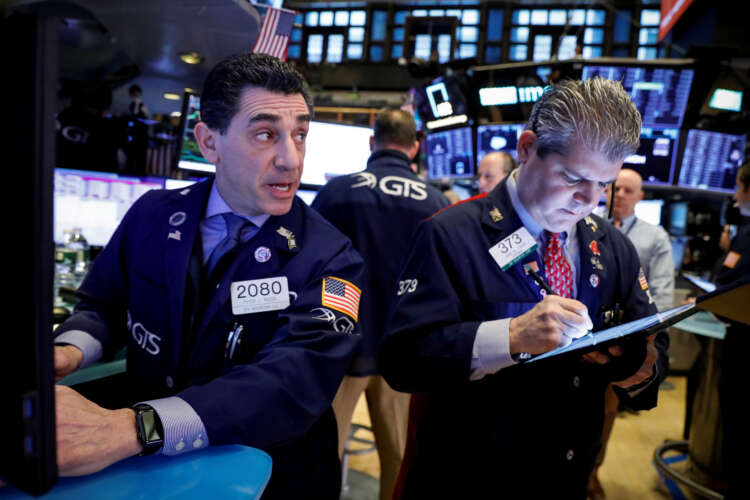 WASHINGTON (Reuters) – Global equities markets were little changed on Thursday after stepping back from near-record levels earlier in the week, as investors studied strong U.S. data reports for economic recovery and inflation signals.

U.S. stocks pared back some losses on Thursday before shedding those slight gains after reports that President Joe Biden has offered to scrap his proposed corporate tax hike.

Gold slid more than 2% as a strengthening labor market helped propel the dollar higher and boosted expectations that the strong economic readings may reignite taper talk from the Federal Reserve.

A better-than-expected U.S. weekly unemployment report and private payrolls numbers for May pointed to strengthening conditions in the labor market, while a measure of service sector activity increased to a record high, pointing to a robust economic rebound.

The strong data could force the Federal Reserve to pare back its crisis support sooner than expected, despite central bank officials’ reassurances to the contrary.

Yet, wary investors backed away from big bets over concerns of inflation ahead of the Friday release of U.S. jobs data, which should offer further clarity on whether the faster-than-expected pace of economic recovery can be sustained and what that might mean for monetary policy.

Thursday’s weekly U.S. unemployment claims report will be followed by monthly jobs numbers on Friday. Investors will be looking for signs of an economic rebound and rising inflation.

“In general, we suspect that these conditions will remain in place for a while longer.”

Capital Economics forecasts that real global output will grow at the fastest rate in nearly 50 years this year.

“While it is possible that major central banks eventually have to tighten policy faster than is widely expected if inflation does not fall back in the way they are anticipating, it will be hard to tell if this is happening until next year at the earliest,” Jones said.

(Reporting by Katanga Johnson in Washington; Editing by Steve Orlofsky and Nick Macfie)