We are facing a two-year recovery, according to corporate Britain 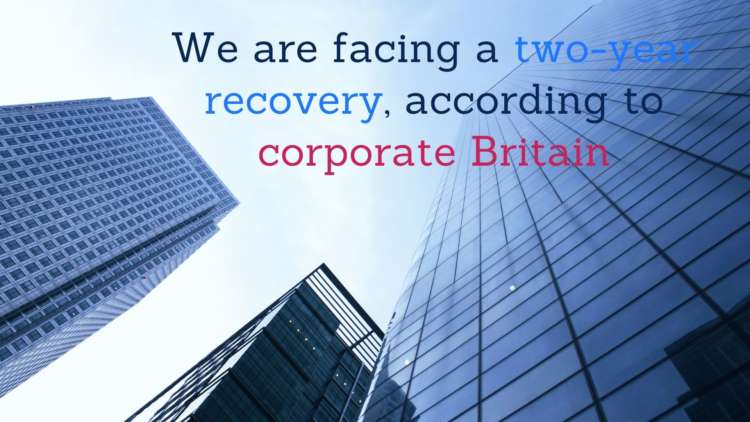 According to a survey conducted by Kroll, the world’s premier provider of services and digital products related to governance, risk and transparency, business leaders believe that it will take longer than the government predicts for the UK to get out of lockdown and the economy to bounce back to its pre-pandemic level.

The figures are at odds with the Office for Budget Responsibility (OBR) the government’s Budget watchdog, which predicted the UK’s GDP will return to pre-crisis levels by the middle of 2022. The poll asked 400 senior executives how quickly they felt the economy would return to pre-pandemic levels, as well as how confident they felt about a recovery this year.

Matthew Ingram, Managing Director UK Restructuring, Kroll, stated: “The Office of Budget Responsibility is taking an upbeat view predicting an increase in UK GDP of 4% in 2021, followed by around 7% in 2022. On its assumptions GDP could well be back to its pre-COVID-19 level by mid-2022. However, our polling has identified a very different sentiment amongst those business leaders who are at the coalface. The confidence of the OBR is simply not being shared in the wider economy.”

The latest figures from the Insolvency Service report that corporate insolvencies fell by 9% to 686 in February 2021 compared to January’s figure of 754 and were 49% lower than February 2020’s figure of 1,348.

Looking at this at a granular level, in February 2021 when compared with the number of company insolvencies registered in February 2020, compulsory liquidations were 86% lower, Creditor Voluntary Liquidations 38% lower, Company Voluntary Agreements 68% lower and administrations 62% lower.

Ingram continued: “It sounds counter intuitive to the broader narrative on the impact the pandemic. But what we are seeing is the impact of an activist government supporting businesses across two fronts—financial support and the temporary suspension of pre-existing corporate insolvency and governance legislation. But corporate Britain does feel like its covered in sticking plasters right now and the confidence many business leaders are feeling as the economy finally opens up is being tempered with the legacy that the necessary government interventions will leave behind.

“VAT deferments now need repaying, loans need servicing, staff need to be bought back off furlough, and rent arrears need settling. Corporate Britain has been piling up the debt and while that may have seen many through the pandemic, it will be an enduring challenge for many businesses as they look to the future. Our polling supports this as business leaders are acutely aware of the twin threats of unemployment suppressing consumer demand, and financial pressures as they come off government support.”

Selling to an employee ownership trust: the benefits and key features