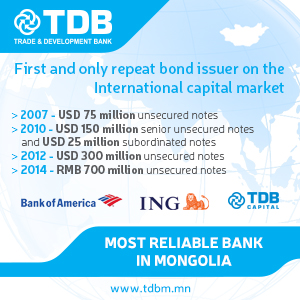 TDB, the oldest bank of Mongolia, prides itself for its leading position in the universal banking service provider, offering a full range of over 100 types of international standard banking services, including large corporate, SME and retail lending, deposit-taking, trade finance, remittance, cash management, treasury, foreign exchange and investment banking. TDB acts as a primary lender to most of Mongolian leading corporations as well as foreign corporations and foreign representative offices across all major industrial and commercial sectors with a constantly innovating range of universal banking products and services delivered with dynamism and excellence in service and quality.

Leveraging this pre-eminent position and its long-standing customer relationships, the Bank has consolidated its market-leading position in the handling of international trade finance and remittance, with access to credit lines from major international lenders and correspondent banking relationships with over 150 international financial institutions.

In 2004, TDB was the first bank in the country to receive the investment from the Asian Development Bank (ADB) and International Finance Corporation (IFC) totaling USD 11 million, in the form of USD 3 million in new shares and USD 8 million in a subordinated five year term loan. Also, in 2006 TDB became the first commercial bank in Mongolia rated by Moody’s Investors Service.

Based on its international reputation the Bank has signed an investment agreement with The Goldman Sachs Group, a leading global financial services firm in 2012.

Always responsive to the public’s various banking requirements, TDB offers over 100 types of international standard banking products, services and has about 1386 highly qualified staffs providing professional and user friendly banking services through a network of 47 branches, settlement centers, 183 ATMs, 1952 POS terminals.  TDB is undoubtedly the major player in the financial and banking markets as well as a major innovator of the Mongolian financial sector.

TDB has issued the country’s first ever offshore CNH 700 million bond listed in Singapore Stock Exchange on 14 January 2014 This was the fifth time that TDB tapped into the international bond markets. The issuance of CNH 700 million affirms market confidence in TDB’s strategy, financial strength and management and the Bank’s standing in the international markets. It is an event of great significance within the bigger picture of further opening up Mongolia’s economy to the world and strengthening TDB’s ability to grow strong.

In December 2013, the Bank signed a contract with Allen International to create a best in class branch design to improve our financial services delivery with targeted segments. This will help us further to our goal to become the most international Bank in Mongolia setting up the new standards for banking sector.

TDB has announced its first ever syndication on the international syndicated market in September 2013. The syndication was comprised of USD 35 million A loan arranged by FMO and USD 47 million B loan arranged jointly by ING and TDB Capital LLC, totaling USD 82 million in facility.

In 2011, TDB Capital was established to be regulated and licensed by the Financial Regulatory Commission of Mongolia to act as an underwriter, broker and other investment banking service provider that shall be done on behalf of the customer upon its order.