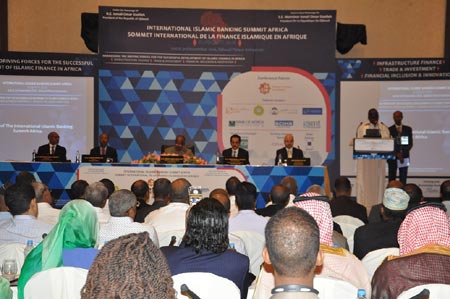 The Islamic finance industry offers a number of key value propositions to markets in Africa as government agencies, international Islamic financial institutions, as well as emerging local players and central banks seek to tap into the opportunities that will drive vital economic development priorities on the continent

Enabling industry leaders from across the key markets of Africa, the Middle East and internationally to better engage with how Islamic finance can positively impact economic development priorities on the continent, The International Islamic Banking Summit Africa: Djibouti 2016, held under the patronage of H.E. ISMAÏL OMAR GUELLEH, President of the Republic of Djibouti and Head of Government, and with the official support of the Central Bank of Djibouti, opened today in Djibouti. The event was attended by more than 250 industry leaders representing over 75 international organizations. A powerful line-up international speakers and industry thought leaders discussed topics focused on Harnessing the Driving Forces for the Successful Development of Islamic Finance in Africa. The Summit opened with a keynote session featuring H.E. Ahmed Osman, Governor of the Central Bank of Djibouti; H.E. Getahun Nana Jenber, Vice Governor of the National Bank of Ethiopia; and H.E. Khaled M. Al-Aboodi, Chief Executive Officer of the Islamic Corporation for the Development of the Private Sector (ICD, Saudi Arabia),who deliberated on how to build the regulatory infrastructure essential to create a strong platform for the future development of Islamic finance in Africa.

The opening keynote session was followed by a special presidential plenary address by H. E. ISMAÏL OMAR GUELLEH, President of the Republic of Djibouti and Head of Government, who reaffirmed Djibouti’s commitment to the successful development of Islamic finance in the region. The special plenary address was followed by the second major keynote session, which featured Mohamed Ahmed Bushra, Assistant Governor for Economics & Policies of the Central Bank of Sudan; Jaafar S. Abdulkadir, Head of Islamic Banking of KCB Bank Group; and Roberto Giori, President of the Roberto Giori Company who provided insights into how Islamic finance can better connect the economies of Africa to the Gulf, the broader OIC markets and beyond from the perspective of boosting investment and innovation. This high-profile session was moderated by William Mullally, Editor of Islamic Business & Finance (CPI, Dubai).

Speaking to media present at the Summit, H.E. Khaled M. Al-Aboodi, Chief Executive Officer of the Islamic Corporation for the Development of the Private Sector(ICD, Saudi Arabia) noted that: “There are many significant signs that Islamic finance is gaining serious momentum on the African continent and is becoming one of the key drivers for equitable and sustainable growth for a strong and dynamic private sector. Clearly the growth of Islamic finance will not only provide new financial instruments but will also provide greater access to liquidity pools across the Middle East which will result in faster economic, social and human development on the continent.” Another major highlight at Day 1 of the Summit was a live interview session featuring renowned international Islamic banker,Afaq Khan. Mr. Khan was interviewed live on stage at the event by Moinuddin Malim, Managing Partner of Alternative International Management Services (Dubai), and during a wide-ranging interview, he provided unique personal insights into the future development paths for Islamic finance internationally and across Africa.

Speaking on the sidelines of the Summit,Afaq Khan commented: “The global Islamic finance industry will continue to grow at a much faster rate than conventional banking and also increase its market share notwithstanding ongoing challenges such as Shariah standards across markets, regulations, tax issues, and documentation standardisation. Due to the increasing demand for Shariah-compliant investments globally by both Muslims and non-Muslims, the industry has grown by an estimated 20 per cent annually in the last five years. As of now, Africa has only around 2% of global Islamic banking assets and as little as 0.5% of Sukuk outstanding and, notwithstanding ongoing turbulence in the global economy, the stage is set for the rapid growth of Islamic banking and finance across Africa. In addition, Africa’s strong potential for rapid growth in retail banking has also drawn several international Islamic banks to invest on the continent.”

The Summit also addressed how Islamic finance can increase the flow of trade and investment in Africa. Ibrahim Rashid Jaffar, Chief Executive Officer of East Africa Bank; and CassimDocrat, Director of DDCAP (DIFC) Limited; led this session that identified new opportunities for faster trade and economic growth across Africa.

Day 2 of the International Islamic Banking Summit Africa 2016 will continue on the 3rd of November 2016 and follows a practical master class format, which will be led by AIMS (Dubai) and ABL Dunamis (Uganda).

The International Islamic Banking Summit Africa 2016 is created in collaboration between the Central Bank of Djibouti and Ethico Live!

Ethico Live Limited is a UK registered company with its corporate headquarters at 110 Queen Street, Glasgow G13BX, UK. Through our on-the-ground presence in key centres across the world we are able to serve our clients in the global financial markets with high-profile international conferences in Europe, the Middle East, Africa and Asia.

MOBEY FORUM: IS THE CUSTOMER NOW THE WEAKEST LINK IN RISK EVALUATION OF MOBILE FINANCIAL SERVICES?