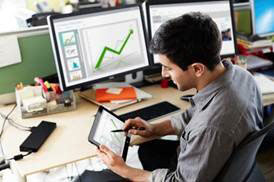 When the UK coalition government won power in 2010 many challenges faced them. Britain’s incoming Chancellor of the Exchequer, George Osborne, laid out a series of belt-tightening measures designed “to get the UK economy back up and running”, with an emphasis on the growth of private enterprise.

It is debatable whether the austerity measures that followed Osborne’s Emergency Budget in 2010 would prove beneficial to UK society as a whole over the next five years, but the economy is certainly back on its feet – though again, it is debatable that this down to George Osborne. That said, the UK is in a stronger position than it was in 2010 while there remains a great deal of uncertainty regarding the strength of mainland Europe.

The UK’s economic recovery was certainly seized upon by the Conservative half of the coalition in 2010, with the publication of a letter signed by 5,000 small businesses backing the blue corner stating, “We are the party of the grafters and the roofers and the retailers and the plumbers. We get them, we respect them, we understand them, and we back them”. But then all of the main parties in the election campaign were keen to show their support for small business as Ed Miliband noted on the campaign trail, “I think small businesses are the lifeblood of a successful economy … So we are going to cut business rates for small businesses, because lots of them are operating on the margins and we want to make life easier for them.”

Economies, like fashion, move in cycles, and with post-election euphoria in the air for the blue corner, it seems that we are entering a long overdue period of growth. This could just be a misconception, but we will have to wait and see, in business, sometimes these positive thoughts are enough to get things moving in general.

The financial crisis of 2007 seems like a lifetime ago, and in the technology business some of the changes have been life changing. Apple unveiled the iPhone in 2007 and the boom in smartphones and tablets that followed in the consumer world showed little consideration towards the global recession. The consumer tech boom since 2007 ran parallel with an explosion in cloud services and software defined everything in the enterprise space. Dell also underwent a hugely significant change.Going back into private ownership was a move that enabled the company to return to its entrepreneurial roots and build a business with long term goals. One of many initiatives at Dell was to launch its Financial Services business.

Dell Financial Services (DFS) launched just two years ago in response to change the way that businesses are starting to finance growth and subsequent increased demand for technology to support this. A loan from DFS gives businesses an affordable and convenient way to acquire new IT products and services, with affordable monthly payments.

As the digital economy bloomed, small businesses grew. As a result of size, relative youth and in some cases innovative business models they sometimes struggle to obtain funding. Dell Financial Services helps to fill that gap. Undoubtedly, the leasing industry is being disrupted, businesses are realising the benefits of moving Capex to Opex, improving cash flow for the business.

It’s not just small businesses. Departments within larger organizations often have a great deal of spending autonomy, particularly when it comes to smaller amounts. But when it comes to IT spend they are often tied to the budgets. Even in cases where money and hardware would be forthcoming, it can be faster to act autonomously. Imagine a scenario,an organization needs to buy something in January, but budget is not available until April.

It is worth noting that the public sector, where austerity measures have been felt more keenly, represents a larger area for smaller financing deals and leasing. In education for instance DFS has just launched 1-2-1 learning, allowing schools to purchase tablets, so children can learn anywhere. We know that technology increases learning, but with shrinking budgets, schools need to provide cost effective access.

DFS has a full banking license, enabling the offering of a wider product set,and funding. Often small businesses reach their credit limits quickly, as Dell is a relatively new technology financier, it has a lot of credit appetite for purchases, so can be extremely supportive in the amounts that it can lend, something which has doubled over the last year.

Partnering with your IT supplier for finance makes sense. If a business turns to a bankfor credit to expand its IT, a manager cares about repayments. Whereas the IT supplier can consult to maximise the efficiency of the investment.This is in line with Dell being an end-to-end solutions provider. Dell has invested interest in ensuring the IT acquisition is right for the business.

End user financing enables customers to get the right solution, right now. Often customers have commercial barriers to overcome to make the purchase they want, whether that is a budget that doesn’t start for a few months, or is too low for a one off investment, or maybe they have other competing priorities for investment.

Financing for the end user can help close business and speed up payment. Partners can preserve cash and implement a complete Dell solution in minutes rather than days. Most of the process can be automated using the DFS online portal allowing channel partners to arrange funding for deals responsively, around the clock.

The DFS online portal is hugely beneficial for Dell and its partners.It provides access to DFS services to the Dell team and partners, which DFS can move quickly. Credit checking can be done instantaneously and the entire financing process is managed online reducing a lengthy process down to just a few hours-In a small business, agility is everything.

As we look to the future the only certainty is uncertainty. Governments change, technology alters, and businesses change direction. Dell Financial Services is just two years old and has served upwards of 4,000 customers – and its growth is accelerating. Dell’s customers are increasing asking for financial solutions, something they are not getting elsewhere. We don’t know what lies ahead, but with flexible financing models available to businesses, Dell is helping the economy as a whole to grow more sustainably.

FINANCIAL INSTITUTIONS NEED TO JUMP ON THE BIG DATA BANDWAGON