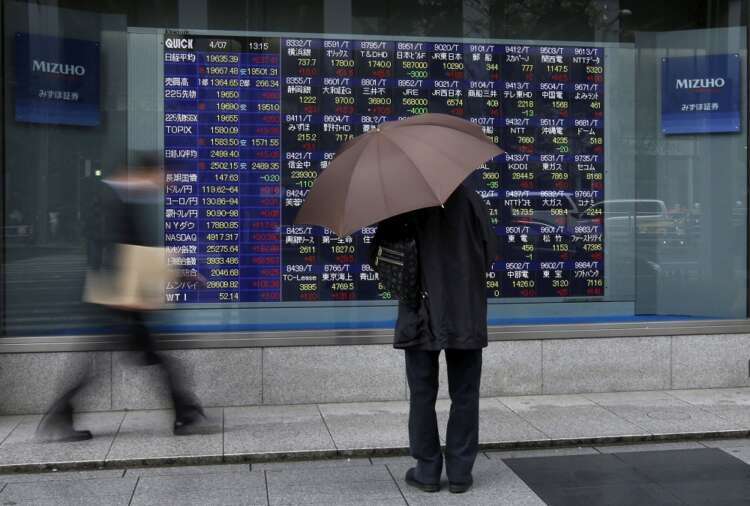 MILAN (Reuters) – Shares fell and the dollar held near highs in holiday-thinned trading on Monday, as concerns about economic growth lingered ahead of an expected U.S. rate hike this week and after data showed COVID-19 lockdowns slowed China’s factory activity.

MSCI’s benchmark for global stocks was down by 0.4% by 1148 GMT, as European and Asian shares fell following Wall Street’s steep losses on Friday in the wake of a disappointing Amazon update.

Data that signalled a steeper pace of contraction in China’s factory activity dampened risk appetite, although the closure of London and most Asian markets holidays reduced volumes.

The STOXX 600 fell 1.2%, recovering from sharp losses earlier in the session after a sudden crash. The pan-European index fell as much as 3% at around 0800 GMT, and the Stockholm benchmark index shed 8% in what brokers said was a “flash crash” or an erroneous trade.

Japan’s Nikkei fell 0.1% and South Korea’s KOSPI declined 0.3% while U.S. equity futures sought to stabilise with Nasdaq and S&P 500 e-minis trading between flat and a fall of 0.1%.

A survey on Monday also showed that euro zone manufacturing output growth stalled in April as factories struggled to source raw materials, while demand took a knock from steep price increases and concerns about the economic outlook.

That raised fears of a sharp slowdown in the second quarter that will weigh on global growth, just as central banks around the world start to tighten policy aggressively to combat inflation pressures, exacerbated this year by the war in Ukraine.

Investors expect the Fed to raise rates by 50 basis points on Wednesday, although there was uncertainty around how hawkish Chair Jerome Powell will sound in comments following the decision.

“A 50bp hike in the fed fund target rate and the announcement of the beginning of quantitative tightening seems to be a done deal,” UniCredit economists led by Tullia Bucco said.

“Still, market participants are uncertain as to whether this big leap forward in the Fed’s policy-tightening process will be accompanied by dovish, neutral or hawkish statements from Powell,” they added in a note.

Around 250 basis points of rate hikes are already priced in by money markets by the end of this year, which UniCredit says reduces the scope for hawkish surprises this week.

On Friday, Wall Street suffered its worst drop since 2020, as Amazon slumped on a gloomy quarterly report, and as the biggest surge in monthly inflation since 2005 spooked investors already worried about rising interest rates.

German Bund yields eased but stayed within striking distance of their highest since June 2015 as investors braced for the Fed, but also for the Bank of England policy meeting on Thursday which will likely raise rates by 25 basis points.

The dollar edged back towards its nearly two-decade high following losses on Friday, and the euro slipped to $1.05, as investors prepared for the likely Fed rate hike. [FRX/]

“We viewed Friday’s softness as stemming from profit-taking and month-end rebalancing… We continue to target the November 2002 high near 107,” Win Thin, currency strategist at Brown Brothers Harriman, said.

The European Union is leaning toward a ban on imports of Russian oil by the end of the year, two EU diplomats said, after talks between the European Commission and EU member states this weekend.