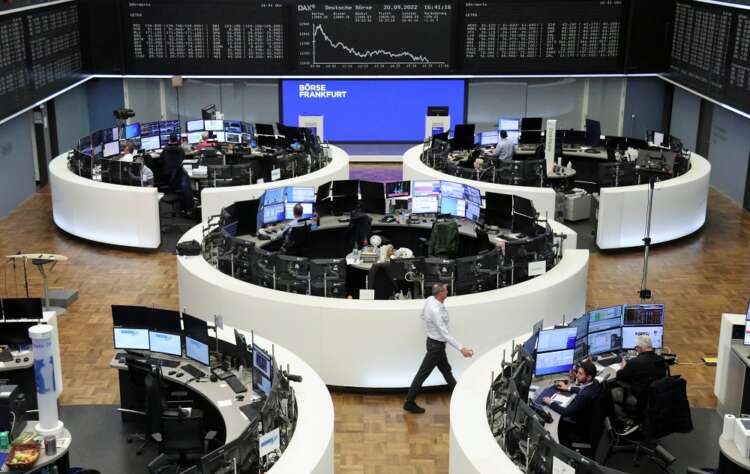 LONDON (Reuters) -Stocks fell, while safe havens such as government bonds and the dollar rose, as anxious investors fled risk assets after Russian President Vladimir Putin on Wednesday ordered a mobilisation over Ukraine and accused the West of “nuclear blackmail”.

After an initial lurch lower following Putin’s comments, European equity markets pared losses, leaving the STOXX index with a gain of 0.4% on the day, propped up by a rally in oil and gas stocks, which responded to a jump in energy prices. [O/R]

With the U.S. Federal Reserve due to deliver another aggressive rate hike later in the day, in a week packed with major central bank decisions, key market measures of volatility neared multi-week highs.

“There will be more of a flight to safety. We’re likely to see the dollar gain strength again. And I think there will be a rally to funds which perhaps offer security,” Susannah Streeter, senior investment and markets analyst at Hargreaves Lansdown, said.

Putin said he had signed a decree on partial mobilisation beginning on Wednesday, saying he was defending Russian territories and that the West wanted to destroy the country.

“If the territorial integrity of our country is threatened, we will use all available means to protect our people – this is not a bluff,” Putin said in a televised address to the nation, adding Russia had “lots of weapons to reply”.

“It’s the fact that he’s decided to dust off the nuclear card that obviously hasn’t gone down well, and the euro has really been feeling the effects of that as well,” Michael Hewson, chief markets strategist at CMC Markets in London, said.

Equities were already under pressure given the jitters around the Fed’s upcoming policy decision at which it is widely expected to lift rates by three quarters of a point.

The MSCI All-World index of global shares dropped 0.3% to skim two-month lows, while gold, another traditional safe-haven, gained 0.5% to trade around $1,667.40 an ounce, set for its largest one-day rally in over a week.

Crude oil jumped by 2.4% to $92.75 a barrel, while natural gas prices shot higher, as traders braced for another blow to global energy supply.

The Fed headlines a week in which more than a dozen central banks announce policy decisions, including the Bank of Japan and Bank of England on Thursday.

As traders and investors have ratcheted up their expectations for central banks to raise interest rates to quell persistent inflation, global bond yields have soared in recent months.

But with nerves over Russia running high, so did demand for the comparative safety of government debt.

German 10-year Bund yields dropped 7 basis points to around 1.873%, on course for their largest one-day drop in a month, having hit their highest since early 2014 the day before.

The 10-year Treasury yield touched 3.604% on Tuesday for the first time since April 2011 before retreating to 3.535% after Putin’s comments.

UniCredit focused on “internal delivery”, open to M&A in all its markets