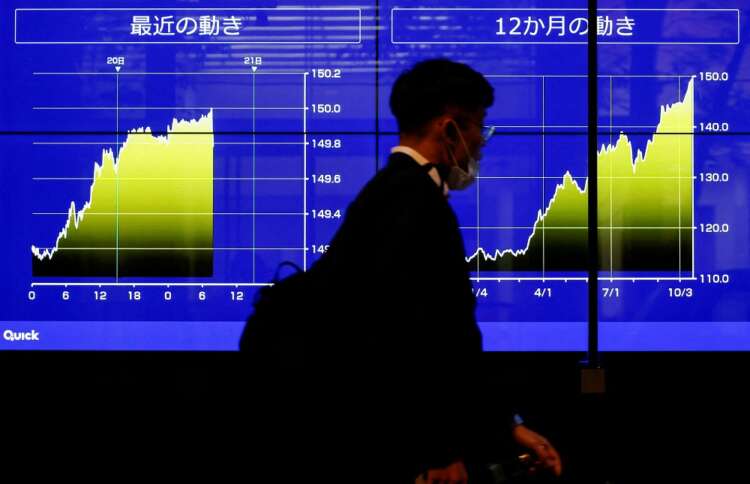 NEW YORK (Reuters) – A gauge of global stocks eased on Monday after scoring its biggest weekly percentage gain in two years last week and U.S. bond yields rose as a Federal Reserve official dampened hopes the central bank may be close to pausing its tightening path.

But Federal Reserve Governor Christopher Waller said on Sunday that though the central bank may consider slowing the pace of rate increases at its next meeting, that should not be taken as a “softening” in the fight to bring down inflation, and while the data was “good news” it was “just one data point.”

“The market is expecting the Fed to continue its hawkish rhetoric on rates,” said Peter Cardillo, chief market economist at Spartan Capital Securities.

“That could all change once we get more confirmation on inflation in December. Once they (the Fed) raise rates at 50 (bps), there’s a possibility that they might indicate slower rates.”

On Wall Street, the S&P 500 was modestly lower after recording its biggest weekly percentage gain since June last week, weighed down by declines in megacap growth companies such as Microsoft and Amazon that have struggled this year as the Fed embarked on its path of rate hikes.

Investors will get another look at inflation when the U.S. producer price index is released on Tuesday.

Benchmark 10-year notes were up 6.4 basis points to 3.893% from 3.829% late on Thursday. The bond market was closed for the Veterans Day holiday on Friday.

U.S.-listed Chinese stocks gained on reports regulators have asked financial institutions to extend more support to stressed property developers amid signs the government may be starting to relax some of its strict COVID-19 policies. E-commerce firm Alibaba.com shares were up 1.61%.

U.S. President Joe Biden met Chinese leader Xi Jinping in person on Monday for the first time since taking office on the sidelines of the Group of 20 (G20) summit, with both stressing the need for a better dialogue between their nations and the two sides establishing a mechanism for more frequent communications.

In cryptocurrencies, bitcoin was last down 1.41% at $16,518 after falling below $16,000 for the first time since Thursday as investors continue to assess the fallout from last week’s collapse of crypto exchange FTX.

Toyota revamps Prius in bid to give hybrids back their halo