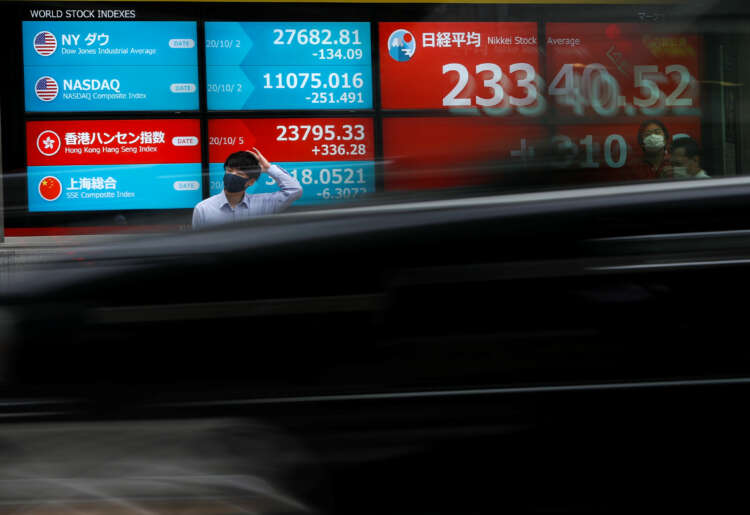 NEW YORK (Reuters) -Strong company earnings and solid economic growth data pushed U.S. shares to record highs on Thursday, though the Federal Reserve’s message earlier this week that it was in no hurry to taper stimulus pinned the dollar at a one-month low.

Following a spate of strong earnings reports from companies from Ford Motor Co to KFC-owner Yum Brands Inc overnight, investors were further cheered by data showing the U.S. economy grew at a solid annualised pace of 6.5% in the second quarter.

“Today is a follow-on from really good earnings last night, which is great news,” said Tim Ghriskey, chief investment strategist at Inverness Counsel in New York, which manages $4 billion in assets. “The expectation is that we will continue to see good earnings.”

Chinese blue-chip shares rebounded 1.9%, and the Hang Seng Tech Index, the target of heavy selling recently, leapt 3.8%, though it was still down 4% for the week. [.SS]

But the market exuberance did not extend to the dollar, which languished as investors digested the Federal Reserve’s remarks on Wednesday that the timing of when it will start to taper its bond purchases depends on the strength of economic data.

The Treasuries market appeared to agree as well that the Fed will be patient when it comes to withdrawing monetary policy support. That helped to push the yield on 10-year Treasury notes down 0.5 basis points to 1.258%.

Gold investors also cheered the prospect that a dovish Fed that is more focused on supporting economic growth than tempering price pressures bodes well for bullion, which is seen as a hedge against inflation. [GOL/]

Oil prices were also firm as data showed crude stockpiles in the United States, the world’s top oil consumer, fell to their lowest since January 2020, with Brent crude oil prices pushing back above $75 a barrel.