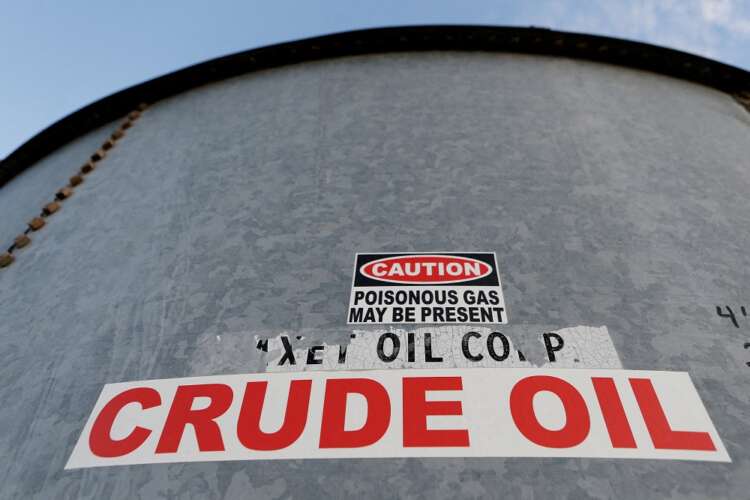 LONDON (Reuters) -Oil prices edged higher on Thursday after earlier falls as investors weighed the risks of recession and how fuel demand will be affected by rising interest rates and tight supplies.

Both benchmarks plunged 3% on Wednesday and around their lowest since mid-May.

Investors continue to assess how worried they need to be about central banks potentially pushing the world economy into recession as they attempt to curb inflation with increases to interest rates.

“Recession fears have their grip on markets, but the mood swing is rather one of ebbing optimism than swelling pessimism,” said Julius Baer analyst Norbert Rucker.

U.S. Federal Reserve chief Jerome Powell on Wednesday said the central bank was not trying to engineer a recession to stop inflation but was fully committed to bringing prices under control even if doing so carried the risk of an economic downturn.

Meanwhile, Russia continues to find alternative customers for its oil that the West is shunning.

President Vladimir Putin on Wednesday said that Russia was re-routing its trade and oil exports towards countries from the BRICS group of emerging economies following Western sanctions over the conflict in Ukraine.

China’s crude oil imports from Russia in May were up 55% from a year earlier and at record highs.

Reuters also reported that India is providing safety certification for dozens of ships managed by a subsidiary of Russian shipping group Sovcomflot, enabling oil exports to India and elsewhere after Western certifiers withdrew their services.

U.S. President Joe Biden, meanwhile, called on Congress to pass a three-month suspension of the federal gasoline tax to help to combat record pump prices and provide temporary relief for families this summer.

The U.S. Energy Information Administration said its weekly oil data, which was scheduled for release on Thursday, will be delayed until next week at the earliest because of system issues.