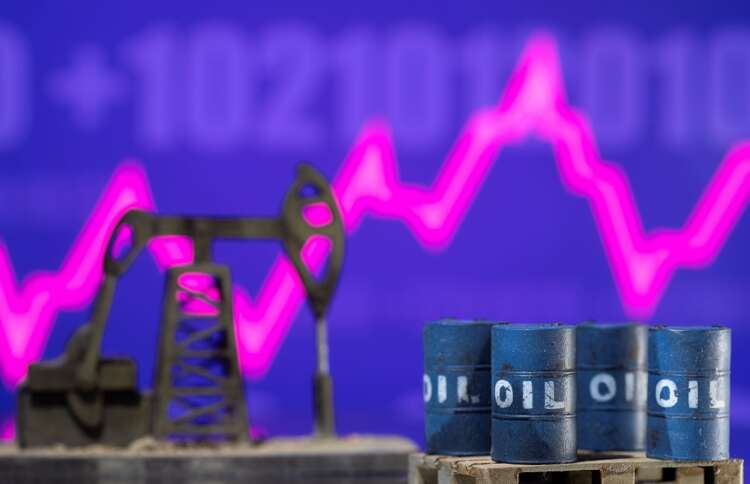 HOUSTON (Reuters) -Oil rose $2 per barrel on Tuesday on high summer fuel demand while supplies remain tight because of sanctions on Russian oil after its invasion of Ukraine.

“We expect oil demand to improve further, benefiting from the reopening of China, summer travel in the northern hemisphere and the weather getting warmer in the Middle East. With supply growth lagging demand growth over the coming months, we continue to expect higher oil prices,” he said.

U.S. President Joe Biden said on Monday that a decision on whether to pause a federal gasoline tax could come by the end of this week, as the United States struggles to tackle soaring fuel prices and inflation, now at its highest in 40 years.

The United States is also in talks with Canada and other allies to further restrict Moscow’s energy revenue by imposing a price cap on Russian oil, Treasury Secretary Janet Yellen said on Monday.

The market has been supported by supply anxiety after sanctions on oil shipments from Russia, the world’s second-largest oil exporter, and questions over how Russian output might fall due to sanctions on equipment needed for production.

European Union leaders aim to maintain pressure on Russia at their summit this week by committing to further work on sanctions, a draft document showed.

“Supply concerns are unlikely to subside unless there is a resolution to the Russia-Ukraine war, or unless we see a sharp rise in supply from either the U.S. or OPEC,” said Madhavi Mehta, commodity research analyst at Kotak Securities.

Prospects are receding for successful negotiation of a nuclear deal with Iran and a lifting of U.S. sanctions on the OPEC member’s energy sector.

Iran is escalating its uranium enrichment further by preparing to use advanced centrifuges at its underground Fordow site, a United Nations nuclear watchdog report seen by Reuters showed.

U.S. petroleum inventory data is delayed this week because of Monday’s public holiday, with industry data due on Wednesday at 4:30 p.m. and government data scheduled for Thursday at 11 a.m.. [EIA/S]

(Reporting by Arathy Somasekhar, additional reporting by Bozorgmehr Sharafedin in London, Sonali Paul in Melbourne and Koustav Samanta and Isabel Kua in SingaporeEditing by David Goodman and Marguerita Choy)

Marketmind: Why the calm in markets won’t last