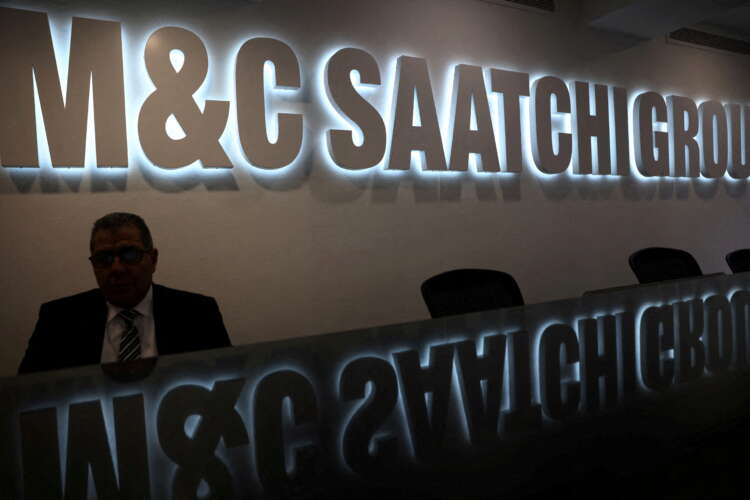 Murria’s AdvancedAdvT said on Monday it had floated two options, one an all-share offer that values each M&C share at around 220 pence or an alternative structure that includes some cash and values them at around 200 pence.

It said the paper offer represented a 20.7% increase on its previous proposal, but that the agency’s independent directors rejected it late on Sunday. The 220 pence price – valuing M&C Saatchi at about 270 million pounds ($364 million)- is based on the AdvancedAdvT stock price when it was halted from trading.

M&C shares were up 2.5% at 179.5 pence in morning trading, before falling following the M&C statement.

AdvancedAdvT, the vehicle of the software entrepreneur Murria that is also backed by private equity group Marwyn, has said it would combine its digital capabilities with the brand recognition of M&C, and invest heavily to help it better compete, including with acquisitions.

Founded in 1995 by ad mogul brothers Maurice and Charles Saatchi, M&C has been recovering from a 2019 accounting scandal and argues the offer does not reflect its expected future growth. It has said it sees little merit in a deal that does not offer its shareholders a full premium.

It said on Monday it had not seen any details about possible takeovers, and there was no guarantee this strategy would work. It also noted that major corporate change can unsettle key staff, a fundamental issue for a services company.

Murria is M&C’s deputy chairman and biggest investor. She owns 12.5% of M&C directly, while AdvancedAdvT owns 9.8%.

In Monday’s statement, AdvancedAdvT said it would want to keep Saatchi’s Moray MacLennan as CEO, with AdvancedAdvT’s Gavin Hugill as chief operating officer. Vin Murria would act as chairperson with a majority of independent directors.

M&C Saatchi in a trading update on Friday lifted its 2021 headline profit before tax outlook, and said a regulatory investigation into the group’s accounting had closed without any enforcement action.

Analysts at Peel Hunt said with the group’s recent strong trading and the closure of the investigation it believed a further improved offer would be required. AdvancedAdvT has until Feb 3 to provide a formal offer, they said.