Apple's weak iPhone sales drive first profit miss since 2016
Our website publishes news, press releases, opinion and advertorials on various financial organizations, products and services which are commissioned from various Companies, Organizations, PR agencies, Bloggers etc. These commissioned articles are commercial in nature. This is not to be considered as financial advice and should be considered only for information purposes. It does not reflect the views or opinion of our website and is not to be considered an endorsement or a recommendation. We cannot guarantee the accuracy or applicability of any information provided with respect to your individual or personal circumstances. Please seek Professional advice from a qualified professional before making any financial decisions. We link to various third-party websites, affiliate sales networks, and to our advertising partners websites. When you view or click on certain links available on our articles, our partners may compensate us for displaying the content to you or make a purchase or fill a form. This will not incur any additional charges to you. To make things simpler for you to identity or distinguish advertised or sponsored articles or links, you may consider all articles or links hosted on our site as a commercial article placement. We will not be responsible for any loss you may suffer as a result of any omission or inaccuracy on the website. 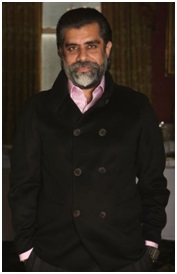 Karan A. Chanana,Chairman and CEO of The Amira Group

Described as a ‘leading Indian businessman’ by BBC Business Edition’s Jamie Robertson, Karan A. Chanana is the global visionary changing the way we view Basmati rice. Chanana is the fourth generation custodian of this family business, founded almost a century ago, and since taking Amira’s helm as CEO and Chairman he has led the company from strength to strength.Chanana has realized his vision for Amira through ‘Food Connect’, an endeavour to build relationships that bond people and cultures across the world through the common language of food.

A foodie at heart, Chanana is a man with a vision that lies in the dissemination of a simple but vital fact – rice is a nutritional, gourmet food that can add beauty to any meal. Rice is allergen free, gluten free and has a low GI, it is Chanana’s mission to inspire international consumers to reconsider this noble grain. The Amira Group bring the highest quality basmati rice to shops internationally and to two of the leading high-end Indian restaurants in London, Gymkhana and Michelin-starred Trishna, who use only Amira rice.

Chanana has utilised this passion for food in his business endeavours, taking the company from a family-run operation with a turnover of $50 million into a professionally managed global business with a turnover of $550 million. The Amira Group now has a market presence in over 60 countries and prides itself on bringing the highest quality basmati rice to the world.

The Amira brand was launched in 2008 and is now sold in over forty countries worldwide, with offices in Germany, India, Malaysia, Nigeria, Singapore, United Arab Emirates, United Kingdom and the United States of America. Recognised by the World Economic Forum as a Global Growth Company for the past four years, Amira is an award-winning global food brand.

Chanana has been instrumental in the innovation of the global rice category and Amira will be launching their delicious ready-to-eat range under his direction. The range features delicious and innovative concoctions, such as quinoa biryani and basmati, chia seed and vegetable pilaf, representing new, exciting ways for people to engage with and rediscover rice.

Charity is of great importance to Chanana and he nurtures several CSR initiatives internationally. These include Family Reach in the USA and Amira’s own Corporate Social Responsibility initiative, Ace Sports, which identifies and supports rising sports stars with potential. Amira are currently sponsoring Shweta Rana, a budding talent in the field of tennis. Amira also work with two key Indian charities, Handicapped Children and Women’s Aid (HCWA) and Handicapped Children’s Rehabilitation Association (HCRA), improving the welfare of handicapped women and children across India.

An industry opinion maker, Chanana is a regular commentator on channels including BBC World News, CNBC and Bloomberg TV. He sits on numerous global boards for industry and agriculture and regularly speaks at conferences internationally.