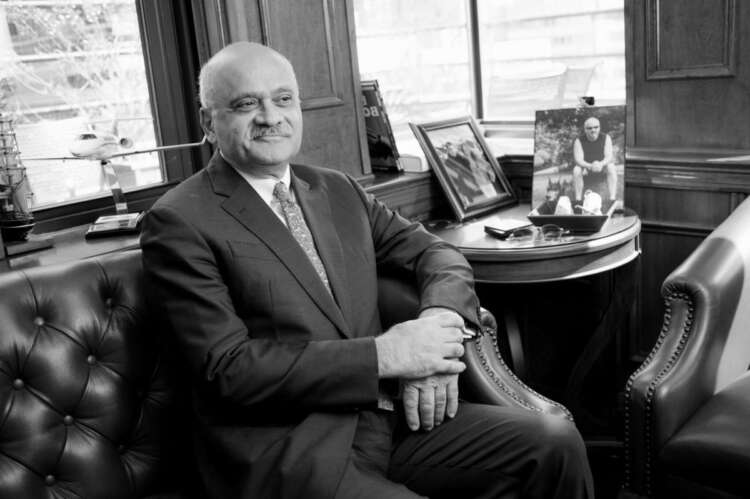 In 2000, Bharat Bhisé established Bravia Capital as an aviation investment business. Since then, it has made numerous investments in leasing, transportation, and logistics businesses. Bhisé served on six major multi-billion operational boards as the primary non-management Director with executive authority. Since the COVID era, Bravia Capital’s focus has been geared towards companies with environmental, social, and governance mandates; together with this, it is focused on philanthropy and public service, especially in areas such as U.S. domestic financial security, gender parity, and anti-racial discrimination.

Bharat and his wife, Swati Bhisé, have spent decades working on and promoting gender equity and parity issues, supporting women running for political office and economic sponsorship of women-owned businesses. Swati and Bharat also serve on the Leadership Councils of RFK Human Rights and The Asia Foundation.

How did you get started?

After finishing college in India, I worked for three years selling earthmoving equipment. I didn’t do much beyond going to various government offices and finding out what sort of plans they had to buy equipment, and then I would write a report. I then came to the United States for my MBA. I funded my tuition and expenses as a graduate assistant at Adelphi University and a part-time pizza maker at the school’s student center. I also drove a cab at night.

After my MBA, I worked with a United States company related to Matsushita of Japan. The person who ran their European office died unexpectedly, and I was asked to manage the European office and their international business. After that, I worked as the U.S. General Manager for an Indian conglomerate building their beverage business.

Following this, I started a company that traded distressed debt of El Salvador and Costa Rica. El Salvador had no foreign credit, so when there was an opportunity to lease them some aircraft, I was able to secure two positions out of the Eastern Airlines bankruptcy. This was my first aircraft deal. This morphed into two jobs — for an aircraft trading company and a hedge fund that invested in aviation. In both cases, I had no equity, so I left to start my own company, Bravia Capital. My first two customers were Boeing and Israel Aircraft.

What do you think of Boeing’s decision to move H.Q. from Chicago to Arlington, VA?

I think the question should be why they did it. American airplane manufacturers such as Lockheed, McDonnel, Fairchild, Douglas, and Boeing were once the technological leaders in the aviation OEM world with close to 100% market share. Today, we only have Boeing left, which has lost 8 out of 10 campaigns to Airbus, Embraer, and Bombardier in the last 10 or 15 years. Their delivery on the Dreamliner was abysmal, and their response to the two crashes on the Max was probably the worst crisis management program I have seen in recent times. It seems to me that they might have given up global leadership on the commercial side and focused primarily on the military sector, for which you need to spend time in D.C. A tragedy for America.

How do you make money?

By trying to align the key stakeholders in any business. This includes owners/shareholders, management, vendors, and customers. If at least 3 of those four have aligned interests, then you have a good business model. In any new transaction, I try to see if value can be created by aligning the interests of all stakeholders.

When you were starting out, was there ever a time you doubted it would work? If so, how did you handle that?

Who is the one entrepreneur to be your greatest example and inspiration? Why?

Fred Smith, the founder of FedEx, who invented the overnight package business. In 1981, nobody thought that anyone would pay $12 for a package to be delivered the next day when you could do it for 7 cents, 3 or 4 days later. But Fred was prescient and saw the huge increase of postal traffic in a system (USPS) ill-equipped to handle the exponential growth of scale we saw in the 1970s. The Post Office is constitutionally mandated to deliver mail at subsidized rates to the population. But raising costs (the price of a stamp) was politically sensitive, so they couldn’t compete, until ten years later, at which point the consolidators had taken the market.

What has been your most satisfying moment in business?

It was closing my first large M&A deal. This involved the acquisition of the Australian aircraft leasing company Allco Aviation. We later rebranded it as Hong Kong Aviation Capital. It was the first deal I had completed of this magnitude and remains a great memory.

What effect do you think the war in Ukraine will have on China, particularly concerning their focus on Taiwan?

Before the Ukraine War, this was a subject that troubled me greatly. However, I am now more optimistic that China will tread more carefully given the certainty of sanctions that would be imposed after a Taiwan invasion similar to those on Russia. Sanctions for China will be far more devastating than for Russia. Russia’s exports are commodities like oil, iron/steel, precious metals, etc., which, despite sanctions, can be traded albeit with discounts. On the other hand, China’s are both consumer and industry-related, and sanctions will have an overwhelmingly negative effect on employment. Which, in turn could be an existential threat to their government, so I think the independence of Ukraine is critical.

Can China help Russia circumvent sanctions? If so, how likely is it they will do so?

They absolutely can, and they are. Russia’s most fungible commodities, like oil and gas, may be sanctioned by the U.S. and E.U., but China will find a way to buy.

How do you see the future of remote working and remote learning affecting your business?

Remote work is a modern version of the labor union movement where employees demand certain rights that they didn’t have before. This is no different from other negotiations, but compensation must be linked to productivity. If you can work at home in your pajamas as effectively as in the office, then prove it.

I believe that business is done via people interacting, not two-term sheets talking to each other in cyberspace. We aren’t in a zero-sum game here where the employer gains/loses what the employee loses/gains. If people never meet in person, then outcomes will tend to be predetermined. And that’s terrible for productivity.

What does the future hold for your business?

I am looking to exit most of my businesses, and the next phase of my life will primarily be in philanthropy and public service.

What’s one trend that really excites you?

The trend towards non-fossil fuel energy will do wonders for saving the planet. In a perverse way, the Ukraine crisis may turn out to be a catalyst and blessing for a faster move towards renewable energy.

What people have influenced your thinking and might be of interest to others?

The first is Sir Garfield Sobers, my childhood cricket hero, who has taught me the importance of dedication, teamwork, common sense, and humility. I’m also incredibly impressed by the tech entrepreneurs who have thought out of the box, such as Elon Musk, Steve Jobs, Bill Gates, and Mark Zuckerberg.

Produced in association with MERGE INTERNATIONAL