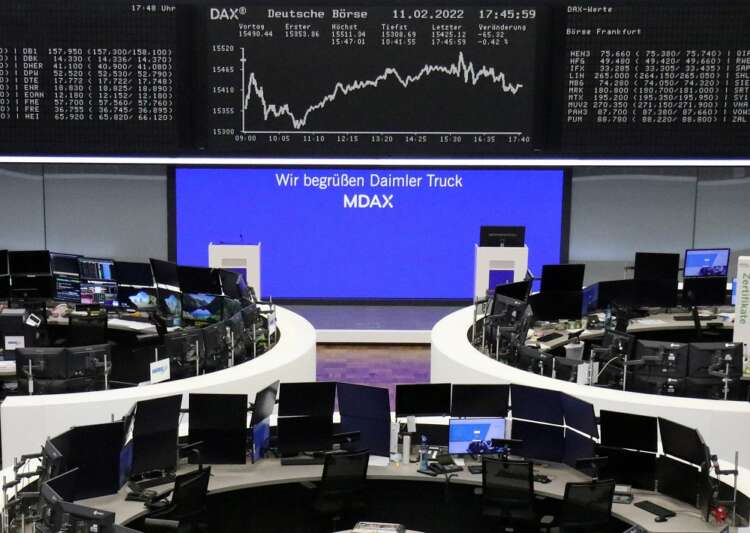 By Herbert Lash and Sujata Rao

NEW YORK/LONDON (Reuters) -World stocks edged lower while oil and gold rose on Wednesday with markets seeking signs of de-escalation after NATO and the United States said they have not seen Russia pull back troops from Ukraine’s borders.

NATO questioned Moscow’s stated willingness to negotiate a solution to the crisis, one of the deepest in East-West relations in decades and accused Russia of increasing its massive military build-up surrounding Ukraine.

U.S. Secretary of State Antony Blinken backed the assessment, an outlook that lifted the price of safe-haven gold and boosted crude oil, supply of which would be further constrained by an invasion.

“There are not really any signs of de-escalation. That’s going to put commodities likely on firmer footing given that extent supply and inventories are really low,” said Bipan Rai, North America head of FX strategy at CIBC Capital Markets.

Sharp gains earlier in Asian equity markets on Tuesday’s news that Russia was withdrawing some troops faded in the European session, with the STOXX 600 pan-European index ceding early gains to slip 0.07%.

U.S. retail sales rebounded sharply in January amid a surge in purchases of motor vehicles and other goods, but higher prices could blunt the impact on economic growth this quarter. [L1N2UR17V]

Data showed retail sales rose 3.8% last month, almost double the consensus forecast by economists of a 2.0% rise. The numbers come ahead of minutes from the Fed’s last meeting at 2 p.m. ET, with investors seeking details on the central bank’s plans to trim its massive balance sheet and hike interest rates.

MSCI’s gauge of stocks across the globe shed 0.16%.

Peter Kinsella, head of FX at Swiss private bank UBP, said “the surprise element is gone” and that markets had priced in a certain deterioration in the Ukraine crisis.

“Given where oil is trading, the ruble should be at 65-66 against the dollar so an awful lot is priced in and the same is true of equities in Europe,” Kinsella said, estimating that gold too was trading with a $100 premium to current fair value.

The Russian ruble gained 0.51% to 75.34 per dollar as fears of immediate military action waned, for the moment.

Inflation was still a market concern as UK data showed consumer prices increased at the fastest annual pace in nearly 30 years, reinforcing chances the Bank of England will raise rates for a third meeting in a row.

Canada’s annual inflation rate accelerated again in January to hit a fresh 30-year high of 5.1%, bolstering the case for a steady series of interest rates hikes.

U.S. Treasury and euro zone government bond yields extended their decline. The yield on 10-year Treasury notes was down 0.5 basis points to 2.040%.

Who will be the winners and losers in Asset Management in 2022?