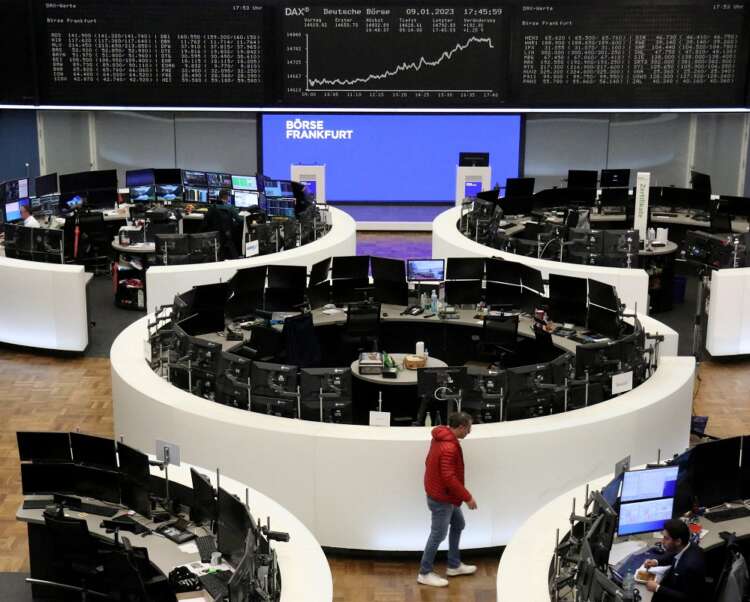 (Reuters) -European shares rose on Thursday ahead of U.S. inflation data that could sway the monetary policy direction at the world’s largest economy, while gains were capped by a drop in shares of Ubisoft and Logitech after the companies cut their forecasts.

The STOXX 600 rose 0.6%, with banks and industrials boosting the pan-European index.

The focus is on U.S. inflation data due at 1330 GMT, after some Federal Reserve policymakers said this week the reading will help them decide if they can slow the pace of rate hikes.

The much-anticipated report is expected to show U.S. consumer prices grew 6.5% year-on-year in December, moderating from a 7.1% rise in November, according to economists polled by Reuters.

“We are expecting to see the number cool and looking at core inflation coming down as well. That is generally blowing an air of optimism through markets,” said Danni Hewson, financial analyst at AJ Bell.

The rate-sensitive tech sector rose 0.4%, supported by a rise in semiconductor stocks such as ASML Holding after Taiwanese chipmaker TSMC reported a forecast-beating 78% rise in quarterly profit.

Logitech International dropped 12.3%, after it posted lower earnings and sales between October and December, and cut its sales outlook.

Shares in Ubisoft fell 18.5% after the French video game maker warned of lower-than-expected full-year revenue and postponed the release of its game “Skull and Bones”, prompting some analysts to cut their estimates and price targets.

“The expectation is that tech is going to be hit harder,” said Hewson. “Unless it is a massive shock to the market, it is just not breaking through.”

ASOS jumped 15% after the online fashion retailer said operational changes would help it deliver a 300 million pound benefit to its current financial year, giving the group a much-needed lift after sales fell over Christmas.

(Reporting by Bansari Mayur Kamdar in Bengaluru; editing by Uttaresh.V and Shinjini Ganguli)