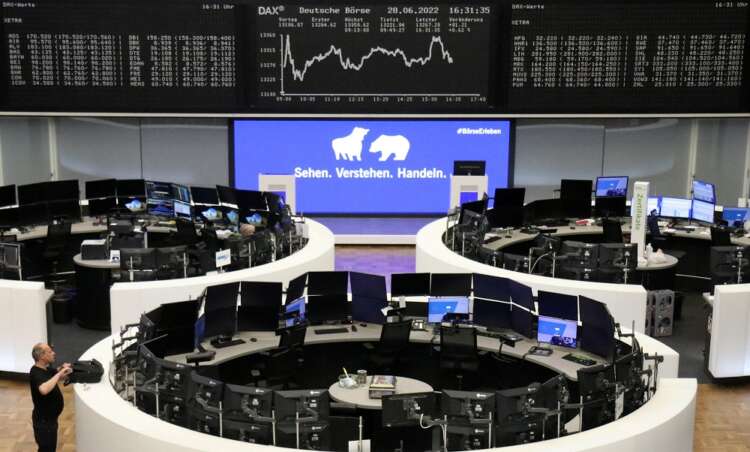 (Reuters) -Economy-sensitive stocks and chipmakers boosted European shares on Thursday, with the latter getting a lift from upbeat results by South Korea’s Samsung, while investors awaited minutes of the European Central Bank (ECB) meeting for clues on rate hikes.

The continent-wide STOXX 600 index was up 1.4%, building on a strong rally marked in the previous session as a strike by Norway’s oil and gas workers came to an end.

Automobiles and basic resources stocks climbed 4.6% and 3.2%, respectively, to lead gains among the European sectors.

Shares of Tenaris jumped 6.8% to power the European oil and gas sub-index after Jefferies upgraded the stock to “buy” from “hold”.

Trading has remained volatile so far this year, as investors debated whether market valuations have turned attractive in the wake of a sharp selloff on concerns that aggressive rate hikes to tame inflation would trigger a recession.

“The key question is will inflation come down first or do we need a recession for inflation to come down afterwards? That’s what the market is trying to grapple with at the moment,” said Dhaval Joshi, chief strategist at BCA Research.

“Most of the valuations selloff, which is because of higher bond yields, is over and behind us. Now the problem we have is if economies enter recession, then we’re going to see quite a lot of profit downgrades.”

Investors will focus on the accounts of the ECB’s June meeting, due at 1130 GMT. In another meeting later this month, the central bank is widely expected to raise interest rates by 25 basis points.

Among other stocks, semiconductor firms STMicroelectronics, BE Semiconductors, ASM International and ASML Holding gained between 1.8% and 3.1% after Samsung Electronics Co Ltd posted its best April-June profit since 2018, underpinned by strong sales of memory chips to server customers.

Shares of Chr Hansen slid 8.3% to the bottom of STOXX 600 after the Danish food ingredients maker reported disappointing quarterly results and narrowed its organic revenue growth target for 2021/22.

(Reporting by Devik Jain in Bengaluru; Editing by Sherry Jacob-Phillips)

Euro just off two-decade low, volatility at highest since March 2020