LONDON (Reuters) – Euro zone governments’ borrowing costs are at multi-month highs and German 10-year bond yields are rising towards 0%, yet ECB policymakers and investors appear unruffled, a sign that they view the bloc’s ongoing economic recovery as the real thing.

It’s a contrast with February when yields on German bonds, the euro area benchmark rate, rose 35 basis points within a month to -0.20%.

That led European Central Bank officials to line up and talk the markets down with veiled threats to tamp down borrowing costs. They then followed up in March by accelerating the pace of emergency bond buys.

This time, Germany’s Bund yield is near its highest level in almost two years and looks set to breach the 0% milestone for the first time since 2019.

Ten-year borrowing costs everywhere else in the euro zone have already turned positive. So why are ECB officials silent?

For starters, the bloc’s economic outlook has brightened. Recent lockdowns did not derail business activity, exports are solid and vaccination campaigns have overcome initial stumbles; the European Union is expected to have delivered first vaccine doses to 70% of adults by the end of the summer.

“What makes a difference for the ECB is the vaccine programme,” said Salman Ahmed, global head of macro at Fidelity International. “In February-March they were making noises because they had no vaccines and they were being affected by the U.S. mini tantrum.”

“The vaccine drive gives it some power to tolerate extra yield pressure.”

The other change is in inflation expectations.

Jim Leaviss, public fixed income CIO at M&G Investments, notes that five-year German inflation breakevens, a market-based inflation measure, are at around 1.4% compared with less than 1% in February and “pretty much at zero” a year ago.

“The euro zone hasn’t delivered 1.4% inflation for a very long time, so this is telling you that people expect a change in the outlook for growth, inflation in the euro zone,” he said. 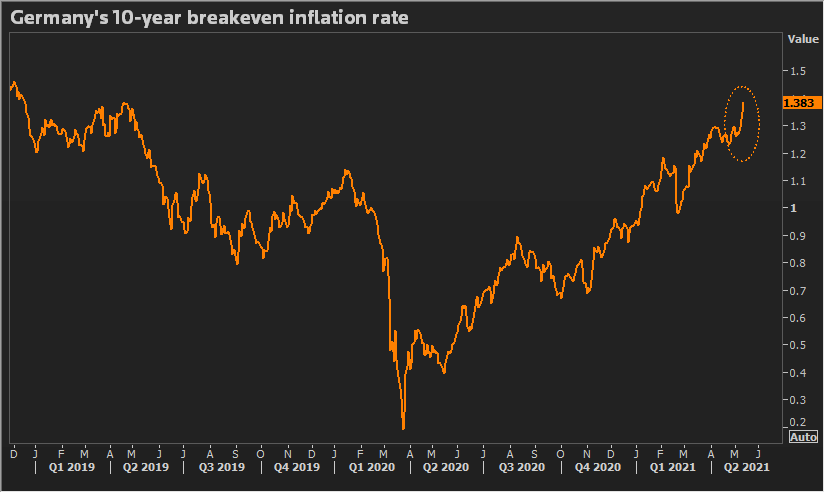 Euro area five-year forward inflation swaps, another gauge of long-term price expectations, are above 1.6% — the highest since late 2018. The indicator didn’t budge much in February, a sign that bond yields then were rising in response to reflation expectations in the United States rather than Europe.

Finally, Leaviss points out, bond yields may be rising but “real” yields – after adjusting for inflation – have barely budged. That’s a real source of comfort for the ECB.

“If real yields started rising and inflation expectations move sideways, which is what happened earlier, this is more of a worry because that feeds through to rising borrowing costs for individuals, corporates and governments,” said Leaviss.

German Bund yields would be the last 10-year euro benchmark to rise above the 0% line. They fell as low as -0.91% last year and at one point almost every euro zone nation was getting paid to borrow 10-year cash.

Now, Natwest analysts reckon German 10-year yields could reach 0.25% by year-end, arguing investors still price in too much of a “pessimism premium.” ING has nudged up its year-end Bund yield forecast to 0.2% from 0%.

Moves in German debt inevitably spill into the rest of Europe. But while higher yields won’t be welcomed by indebted governments, they are sheltered for now, having used years of low rates to lengthen the maturity profile of their bonds.

Some investors are selling bonds ahead of the ECB’s June meeting, fretting that the bank will cave into the policy hawks in its midst and slow the pace of bond buys.

But others such as Mike Riddell, head of fixed income macro unconstrained at AllianzGI, are not too concerned about German yields rising to 0% or higher.

A sustained inflation pick up above the ECB’s rough 2% target is unlikely, and very accommodative policies will stay in place for years to come, Riddell argues.

“Would a positive yield on a 10-year German government bond mean that euro zone government bonds yields are now going to revert to levels seen decades ago?” he asked. “I struggle to see why they would.” 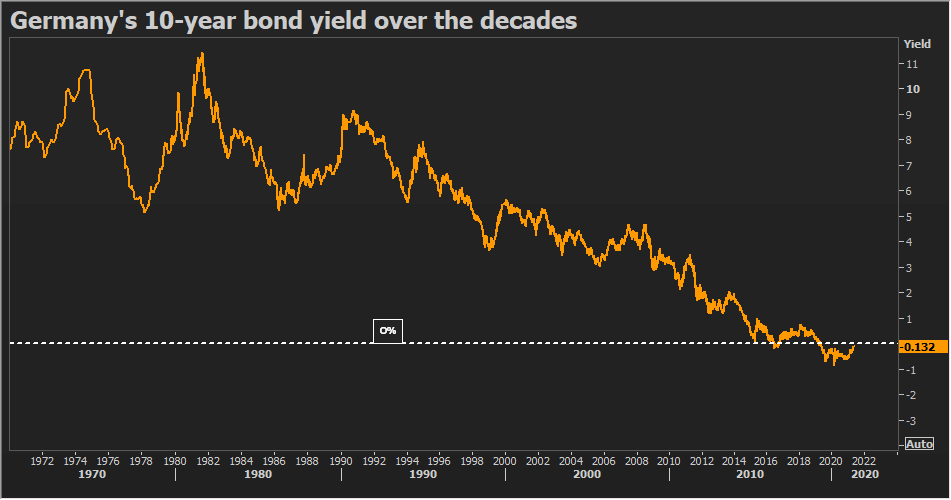