Understanding The World Of CFD Trading: Risks, Rewards, and Research
Our website publishes news, press releases, opinion and advertorials on various financial organizations, products and services which are commissioned from various Companies, Organizations, PR agencies, Bloggers etc. These commissioned articles are commercial in nature. This is not to be considered as financial advice and should be considered only for information purposes. It does not reflect the views or opinion of our website and is not to be considered an endorsement or a recommendation. We cannot guarantee the accuracy or applicability of any information provided with respect to your individual or personal circumstances. Please seek Professional advice from a qualified professional before making any financial decisions. We link to various third-party websites, affiliate sales networks, and to our advertising partners websites. When you view or click on certain links available on our articles, our partners may compensate us for displaying the content to you or make a purchase or fill a form. This will not incur any additional charges to you. To make things simpler for you to identity or distinguish advertised or sponsored articles or links, you may consider all articles or links hosted on our site as a commercial article placement. We will not be responsible for any loss you may suffer as a result of any omission or inaccuracy on the website. 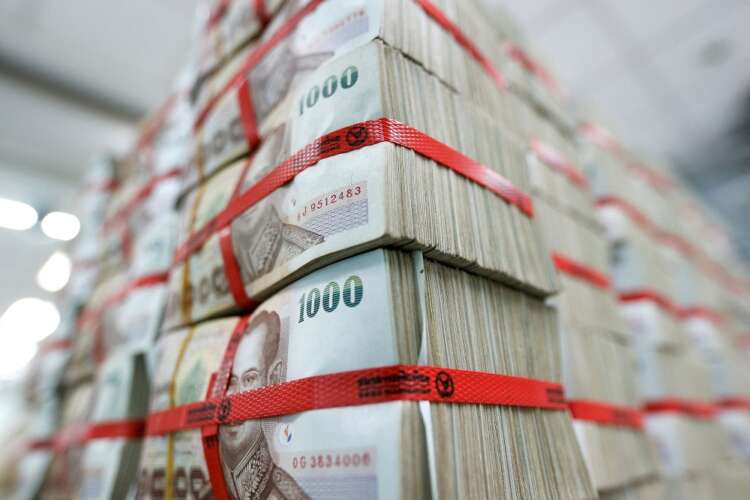 NEW YORK (Reuters) – As the U.S. dollar tumbles from multi-decade highs, some investors are betting emerging market currencies will be big winners from a sustained reversal in the greenback.

The MSCI International Emerging Market Currency Index is up nearly 5% from its lows and notched its best monthly gain in about seven years in November, as expectations that the Federal Reserve will soon slow the pace of its interest rate hikes bolstered the case for investors betting on emerging market currencies.

Signs of a broader turn in dollar sentiment are visible in the buck’s 8% decline against a basket of developed market currencies from its September highs. In futures markets in November, speculative traders swung to a net short position on the U.S. dollar for the first time in 16 months, calculations by Reuters based on U.S. Commodity Futures Trading Commission data showed.

“The planets are lining up for a dollar bear market,” said Paresh Upadhyaya, director of fixed income and currency strategy at Amundi US. 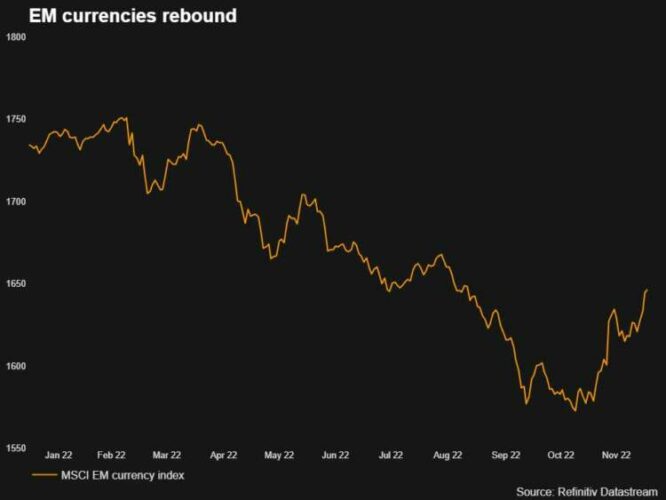 In addition to the possibility of slower Fed hikes, investors cited expectations that China will loosen its strict COVID-19 containment policy and comparatively rich yields found in many EM countries as reasons for adding to positions in emerging market currencies.

Amundi’s Upadhyaya is focusing on the currencies of high-yielding emerging market countries that have balanced current accounts and smaller budget deficits, including the Brazilian real, Peruvian sol= and Indian rupee.

Some emerging markets offer attractive yield even adjusted for inflation. For instance, the inflation-adjusted yield on the U.S. 10-year Treasuries is at 1.08%, compared with 6.07% for the Brazilian equivalent.

Investors have cheered the prospect of a shift in China’s COVID-19 policy, after rare street protests increased pressure on officials to ease some rules. China – the world’s second-largest economy and a key consumer of the commodities produced by many emerging market countries – is set to announce a further easing of its COVID curbs as early as Wednesday, sources said.

The Chinese yuan is up about 5% against the dollar since late October and posted its best weekly performance against the U.S. currency in at least two decades on Friday, while the Hang Seng Index rose 27% in November, its best month since October 1998.

“I think the cat is out of the bag. They can’t go back to their pure restrictive zero COVID policy,” said Jack McIntyre, a portfolio manager at Brandywine Global.

McIntyre has been increasing exposure to some Asian currencies, including the Thai baht and the Malaysian ringgit. Thailand’s currency rose 8% in November, while the ringgit has appreciated 6%.

Some investors think it may be too early to bet on a sustained dollar reversal. While Fed Chair Jerome Powell said last week it was time to slow the pace of coming interest rate hikes, the central bank could raise rates further than previously anticipated as it fights the worst inflation in decades.

At the same time, signs of stubborn inflation in next week’s U.S. consumer price data could reignite bets on Fed hawkishness and boost the dollar.

Investors broadly expect the Fed to raise rates by 50 basis points next week, after a spate of 75 basis-point rate increases.

Conversely, tightening by central banks around the world also risks sparking a global recession, a scenario some believe could hurt emerging market currencies and help the dollar.

A global slowdown “would create a safe haven bid and limit the ability of most cycle-sensitive currencies to rally against the dollar,” said Aaron Hurd, senior portfolio manager, currency, at State Street Global Advisors.

Others, however, are betting China’s reopening bodes well for certain emerging–market currencies.

Carlos Fernandez-Aller, head of Global FX and EM Macro trading at Bank of America, sees an eventual China reopening boosting the Thai baht, which he believes will benefit from an increase in tourism.

Analysts at Société Générale, meanwhile, said an easing of China’s COVID restrictions could buoy the South African rand, forecasting an 18% gain in total return terms for the commodity exporter’s currency next year.

“Improvements in fundamentals, valuations, and technical factors make the argument for stronger EM FX performance over the next year,” they wrote in a recent report.