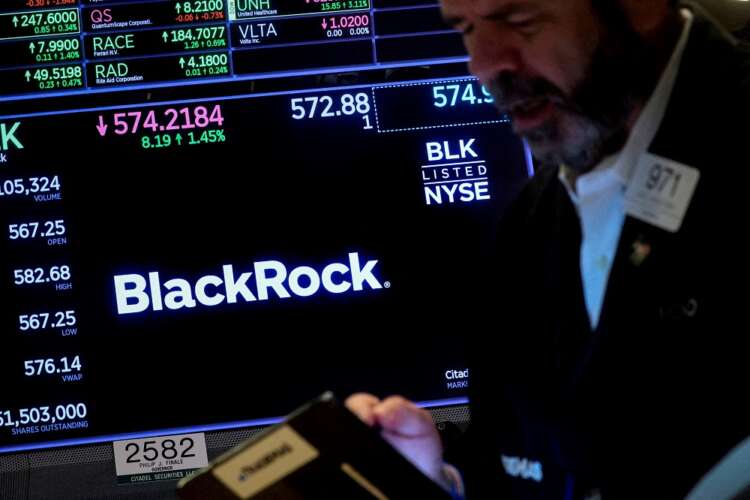 By Carolyn Cohn and Elizabeth Howcroft

BlackRock and M&G are among asset managers to have deferred third-quarter property fund withdrawals this month, taking the total of asset value of funds in limbo to around 15 billion pounds ($18.2 billion), following a similar move by managers to delay second-quarter redemptions in October.

The latest deferrals are the fourth time that real estate funds referred to as open-ended have locked their gates in Britain since the 2008/09 global financial crisis.

The current backdrop is marked by the highest inflation rates for around 40 years and a period of economic uncertainty that knocked 13.3% off UK commercial property capital values in 2022, reversing gains made in 2021, CBRE data showed this week.

“A number of the institutional funds have buildings in the market at prices that we have not seen in almost a decade,” James Nicholls, director of the Central London Capital Markets team at real estate consultancy Avison Young, said.

For the most part, investors acquiesce with gating and payout restrictions on open-ended property funds to avoid hefty losses on big-ticket, hard-to-sell assets, such as malls and office complexes.

But some of the longest-suffering investors are considering cutting their exposure, people in the sector say, while the regulators have attempted to tackle its shortcomings.

The Financial Conduct Authority in 2020 expressed alarm at the mismatch between property assets that can take months to buy and sell, and funds sold on the promise of regular, and even daily trading.

The markets watchdog has introduced a structure known as the long-term asset fund, which requires a longer notice period for withdrawals, but analysts say this has seen little take-up.

Asset managers generally delay payouts when they are unable to meet all redemption requests on open-ended funds, to ensure that customers are treated equally.

But the regularity of such gating has challenged both the logic and return profile of these types of funds, which are often then forced to hold much larger cash positions to manage any rapid surge in withdrawals.

Nicholls said he expected some funds which have deferred payments “to exit some assets in order to build up their cash reserves for when they do have to start dealing with redemptions”.

POLITICS AND THE PANDEMIC

Property funds were suspended on a widespread basis during the 2008/09 financial crisis, following the Brexit vote in 2016 and after COVID-19 lockdowns in 2020. Some funds aimed at retail investors have since closed, in a sign of reduced demand for the sector.

“A lot of assets have been valued and a lot of investments have been structured based off exceptionally low levels of interest rates, so once this repricing has happened, there’s a lot of revaluation to be done,” he said.

Some investors, such as Neil Meikle, global head of real assets at abrdn, whose 1.2 billion pound UK Real Estate fund remains open, are hopeful for the future. He said the trough for UK commercial real estate values was “not far off”.

But without a wave of property sales, finding that floor is a slow and uncertain process.

Preliminary fourth-quarter data shows asset disposals by UK institutions of less than one billion pounds, the slowest period since the data was first compiled in 2001, according to index provider MSCI.

The BlackRock UK Property Fund is working on the sale of a pipeline of assets, a process that began before deferrals were made, a BlackRock spokesperson said.

The spate of deferrals has mainly hit funds aimed at institutional investors such as pension schemes, which have been pulling money out to feed urgent cash calls following the mini-budget in late September.

These investors may shy away from risky assets such as property in future, after rising interest rates have narrowed their deficits.

Marc Devereux, head of investment consulting at pensions consultants Broadstone, said stronger funding positions mean some pension schemes may no longer choose to lock money up in property for long periods, adding that some schemes would need to analyse “whether the existing allocations remain appropriate”.