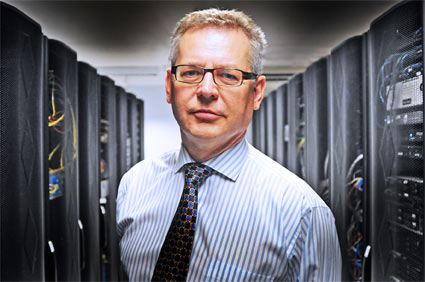 As we enter the year, economic uncertainty is the dominant factor.  No-one knows what will happen to the Eurozone, but it is likely to be either countries surrendering economic power to align with the German view of discipline or a partial or full breakup.  The US has elections in a highly emotional and partisan environment currently paralysing decision-making, China is showing signs of its never-ending growth stopping.  Governments world-wide are cutting costs to try to pay back the money they borrowed when times were good.  In such times, companies do not invest in new and speculative projects.  They hoard cash, reduce debt and try to make their existing investments last a bit longer until the way ahead is clearer.  That is the overall outlook for 2012 – indecision and delay.

Amidst all this gloom, failure and depression is the colocation industry, which is projecting a 30% increase over the next five years.  The industry has several things on its side – the growth of cloud, the increasing digitalisation of almost everything, the ever-decreasing cost of bandwidth, the drive to outsourcing, the need for low latency communications with guaranteed packet transit times, and the green agenda which favours specialised operators over in-house data centres to mention just a few points.
The Cloud will continue to be a driving theme during 2012.  Although not at all new (IBM offered it as “Business on Demand” twenty years ago and we all used to call it “Remote Hosting” before Marketing thought up the idea of “The Cloud”), it has very clear and big advantages for the software vendors.  Instead of selling software as a single package plus support, the vendor can sell it repetitively every month, and, over the life of the package, make far more revenue and profit for a given product development.  At the same time, the customer’s data is held by the software vendor, not the customer, which gives the software vendor a bigger lock-in of the customer.  The user gets flexibility and scaleability, and lower costs for appropriate applications.  Takeup in 2011 was slower than predicted, so we can expect more marketing promotional spend, more hype and more takeup of Cloud in 2012.  Even the Cloud resides somewhere physical eventually, and Cloud creates further demand for colocation data centres in which ephemerality hits the silicon.
Bandwidth will cost less at the end of the year than it did at the beginning, just as it has in every recent year.  The days of £150 per MB seem like a distant dream now, but they were only five years ago.  Hardly ever has a mature industry seen its selling prices decrease by over 90% in such a short time.  At the same time, continued heavy investment is needed to keep up and agile networks using ROADM’s are likely to become more prominent during the year. The anecdotal evidence is that the growth of bandwidth is equalling the decline in price (ie halving the price doubles the demand) so the carriers are surviving, but being CEO of a data or voice carrier will continue being one of the world’s most terrifying jobs in 2012.  Those that survive can look forward to 2013, when consolidation of the carriers is likely to get more ferocious.
Quality of performance of bandwidth is becoming more important.  In particular, latency is becoming a more critical and more public issue.  Financial trading houses running algorithmic trading can win or lose millions on being a millisecond ahead of or behind their competition and will seek out carriers and colocation facilities in the right geographical locations to gain that little advantage.  Equally, consistency of latency is important for real-time applications such as telephony where packets have to arrive with consistent time delays so they can be reassembled in the right order.  Quality and location of delivery for bandwidth will grow in importance in 2012.
Inside the data centre, cooling is likely to be the biggest single focus of 2012.  The market is demanding that data centres become greener and waste less energy on cooling.  At the same time, electricity is becoming more expensive, which incentivises the colocation operators to invest in more efficient cooling to reduce their costs.  Free-air cooling will make big strides in 2012, using cold air from the outside to mix with recirculated air from the inside when conditions outside are cool enough to do so.  It is not a simple as it sounds, and needs careful control of all the environmental parameters to save worthwhile money whilst ensuring that warm, wet air is never passed into cool servers (which would create dew inside the servers).  Evaporative cooling is another technology which will make good progress in 2012.  This involves passing outside air through a wet blanket to cool it before passing it to the servers (a practical application is a bit more sophisticated).  Again, the same care is needed to ensure that the servers never get wet.
Server technology will continue to advance during 2012.  The new ASHRAE temperature ranges will start to come into use, which means that cold aisles will get hotter and cooling bills will decrease.  Unfortunately, this really only applies to data centres where the facility controls the selection of the servers.  In a commercial colocation environment, the colocation operator has no control (or even knowledge) of what equipment the customer will install and it will be a very long time before cold aisles at 27 degrees C become the norm.
So 2012 is likely to be a troubled and uncertain year.  One in which the colocation industry continues to grow and one in which technology continues to advance, but also one with a lot of frustration as projects are cancelled, delayed and scaled back.  We can all look forward to working harder and writing more technical proposals to achieve the same levels of business – and that applies not just to the colocation industry, but to its customers and to its customers’ customers.
About City Lifeline
City Lifeline is the leading independent carrier-neutral colocation data centre in central London.  Lifeline House is situated in an ideal location, just outside the central London Exclusion zone, in the emerging Silicon roundabout district.
With some of the best connectivity in London, City Lifeline provides a secure, reliable and resilient home for telecoms, networking and server hosting.  Its customers have access to the fastest, carrier diverse networks in the UK connecting across the world.
The data centre offers a first-class, flexible and personal service coupled with the security, reliability and engineering team to match.
For further information about City Lifeline visit: www.city-lifeline.co.uk
Share on FacebookShare on TwitterShare on Linkedin
Related Topics:
Up Next