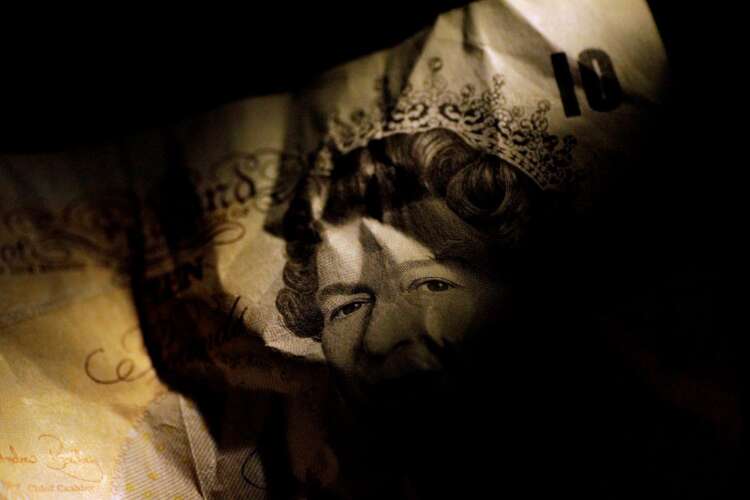 LONDON (Reuters) -Sterling strengthened slightly on Tuesday, hovering around the $1.30 level for its third session in a row, having shown little reaction to news that Britain’s prime minister and finance minister will receive fines for breaking lockdown rules.

Sterling is down overall against the dollar so far this year, as rising U.S. Treasury yields due to expectations for aggressive Fed rate hikes have pushed the dollar higher.

Neil Jones, head of FX sales at Mizuho, said the pound’s relative weakness is a function of dollar strength.

“There’s a hierarchy of perception of central bank hawkishness in terms of rates,” he said.

“The Fed perhaps is leading the pack and the Bank of England is second at least amongst the major currencies and thatâ€™s reflected in foreign exchange.”

Britain’s jobless rate fell in the three months to February, slipping further below the level it was at before the coronavirus pandemic, data showed.

The Bank of England is watching closely for signs the lack of candidates to fill jobs will push up wages to the extent that it risks a wage-price spiral. But workers’ pay is failing to keep up with accelerating inflation. Pay excluding bonuses saw its biggest drop since 2013.

“For the time being, this kind of data can probably support market expectations of a Bank of England Bank rate above 2.00% by year-end (versus 0.75% currently),” wrote ING FX strategists in a note to clients.

“We prefer any GBP strength to be played out against the euro and the Japanese yen, while cable still looks vulnerable to 1.2850 in a strong dollar environment.”

The pound took a brief hit on Monday from data showing the British economy slowed more sharply than expected in February.