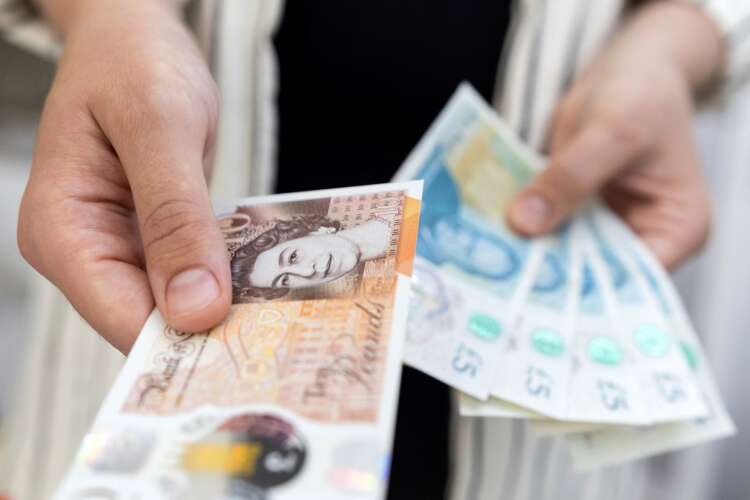 LONDON (Reuters) – The pound dipped on Tuesday, as a week-old rally ran out of steam following downbeat data and a reminder from the Bank of England’s chief economist that inflation could prove persistent, even as domestic energy prices retreat.

The British Retail Consortium said spending in store chains rose by 6.9% in annual terms in December, but this was a long way off consumer price inflation, which hit 10.7% in November.

David Stritch, a currency analyst at broker CaxtonFX, cited government mortgage data that showed 1.4 million UK households will renew their fixed-rate home loans this year – 800,000 of those are on a rate of 2% or below and could see their monthly interest payments double.

“Moreover, BoE data suggests that 25.6% of fixed UK mortgages are up for renewal within the next 1-2 years, meaning that this issue is more than likely to act as a serious drag on growth for years to come,” he said.

Sterling has recovered almost 20% in value since hitting a record low of $1.0327 against the dollar in late September. But it remains 10% below where it was this time last year and its apparent strength is more a function of a slide in the dollar.

A month ago, interest-rate derivatives implied U.S. rates would peak around 4.80 % by June and gradually fall to 4.6% by the end of this year. Now, markets are showing rates rising to 4.9%, but dropping to around 4.4% by year-end.

The UK interest-rate curve shows rates rising to 4.5% by August and falling to around 4.36% by the end of the year – underscoring how “higher for longer” might apply more to Britain than the United States.

Bank of England Chief Economist Huw Pill reinforced this in remarks on Monday, when he said Britain was at risk of persistent inflationary pressure from a tight labour market, even if natural gas prices, which have halved in a month, keep falling, implying further rate rises may be needed.

Britain’s economy ranked last among those of the Group of Seven richest nations in the third quarter of 2022. On Monday, a survey showed the UK has become less competitive and less attractive to foreign investors because of soaring energy costs and recent political turmoil.

Federal Reserve Chair Jerome Powell will address a conference on central bank independence later in the day. Investors will scour his remarks for any signals as to what to expect in terms of changes to monetary policy.

Fed officials have been repeatedly said that, with U.S. inflation running well above the central bank’s 2% target, a shift towards cutting rates is likely to be soon.

U.S. consumer price index data on Thursday could prove instrumental in setting investor expectations for both U.S. inflation and rates.

At the margin, news on Monday that Britain has agreed a way to share live data with the European Union on trade with Northern Ireland, could prove a positive, Rabobank head of currency strategy Jane Foley said.

The deal could represent a step towards resolving long-standing issues arising from the post-Brexit trade rules that govern the region.

“Sterling hasn’t moved, but actually, within this story, it’s finally some good news that is maybe growing out of the UK backdrop – which, let’s face it – looks horrible,” she said.

“Obvbiously, there is a long way to go, but it’s quite a relief to see a bit of positivity coming from UK fundamentals, which isn’t that common these days,” she said.

Cryptoverse: Bitcoin digs in for a bumpy new year