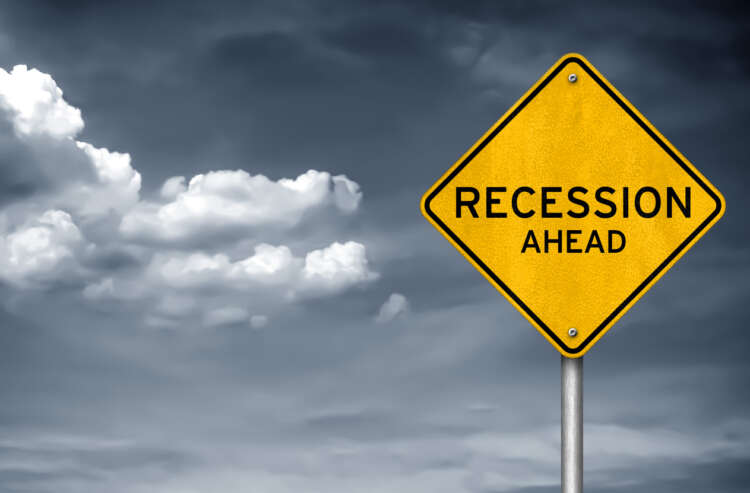 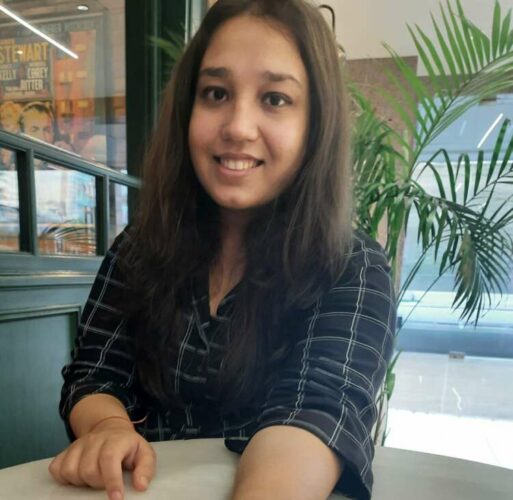 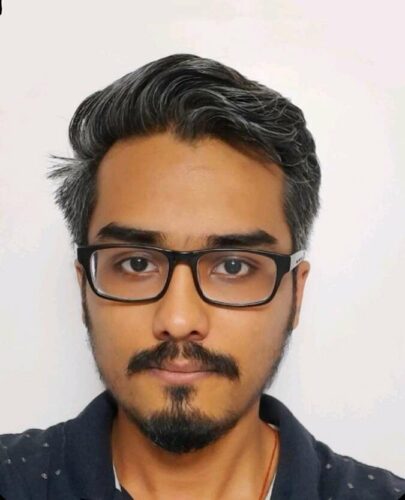 “Recession” is a recurrent and widely discussed topic among academicians and scientists. The 2007-09 global financial crisis was an excruciating reminder of this phenomenon  and recently it has come again into the limelight due to fears of another downturn in the global economy courtesy of the COVID – 19 pandemic.

Despite its significance for every economy, the most widely accepted definition of recession – to wit, “at least two consecutive quarters of decline in national output” – is not as useful as it could be. Reliable GDP estimates are only available after a time lag, so by this definition a recession can’t be identified until it’s already well underway – effectively the same as being warned a ship’s hull has been compromised when it’s already half sunk. This of course limits opportunities to implement counter policy measures which could have reduced the impact of the crisis much earlier.

For most economists, a more meaningful definition of a recession is an extended period of below-trend or ‘below potential’ growth. Trend or potential growth can be hard to measure, but for countries with high rates of population and/or productivity growth, real GDP does not need to be negative for conditions consistent with recession to develop per this approach.

An alternative definition of recession by the National Bureau of Economic Research is “a significant decline in economic activity spread across the economy, lasting more than a few months, normally visible in real GDP, real income, employment, industrial production, and wholesale-retail sales.” As the NBER itself emphasizes, this definition does not require consecutive quarters of negative real GDP growth, despite the widespread use of this conventionally accepted definition. Because monthly GDP data is not available, this research attempts to build on NBER’s definition by offering a model for forward-looking recession prediction using other economic variables.

Importance of our study

Various policy institutions and private sector decision makers (e.g., central banks or financial system surveillance authorities for the former, commercial banks and investment funds for the latter) depend on information on the expected level of future economic activity. An accurate forecast of economic outlook is important for banks and fund managers to make timely investment decisions and for policymakers to implement precautionary policies. If a recession can be predicted accurately, decisions can be adjusted accordingly in advance. For example, bankers can improve their cash balance by providing fewer loans and adopting other investment policies while central banks can implement an expansionary monetary policy. Individuals would do better by planning their consumption, savings and investment if they know about the onset of a recession in advance.

I . This study develops a unified framework to better forecast economic recessions than those used in the literature. There are some widely used and famous forecasting models, but our research is notably different from each one of them.

II. Most of the existing research only uses one or two primary financial variables (interest rates and spreads, stock prices, monetary aggregates etc.) to predict recession. This is an attempt to avoid problems like overfitting which results in poor performance of the predictive model and large changes even to minor fluctuations in data.

(i) covering a longer period by including data for recent years; encompassing the onset of the recent COVID-19 crisis 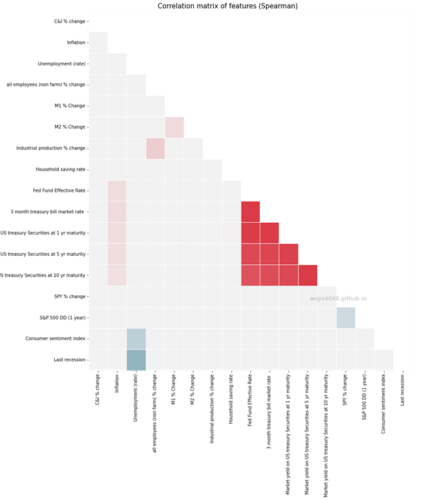 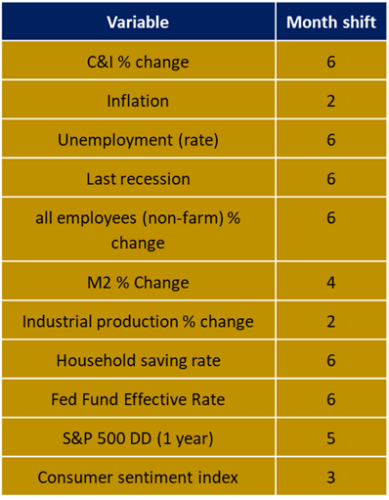 Our dependent variable is a binary class (1 as a recession and 0 as not a recession), and we have used different classification models such as logistic regression, random forest and XGboost.

We then plotted a ROC-AUC curve to compare the performance of each model. The Receiver Operator Characteristic (ROC) curve is an evaluation metric for binary classification problems to visualize how well our machine learning classifier is performing. As per the model benchmarking analysis, XG-Boost was found to be the most predictive model with an AUC score of 0.97. 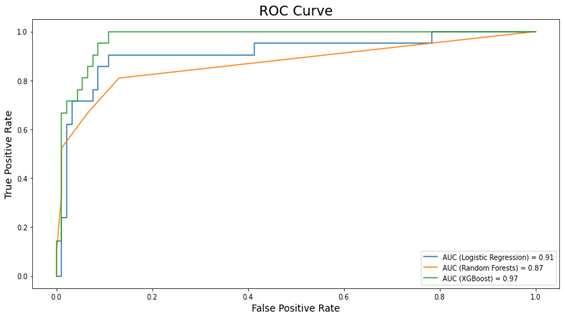 For better understanding of performance of each model we have also calculated recall, precision and F1 score for the 6-month shift.

Recall, Precision and F1 Score are calculated based on the test set.

From the above area under the curve and F1 score we can observe that the XGboost is performing best among these models. Also, the F1 Score on the test set is also within range, indicating our model is not overfitted.

Fig 6: Feature importance based on XGboost

The XGBoost Feature Importance shows the best variables for our research. Hence, we will further analyze the impact of the top 3 variables- industrial production % change, S&P drawdown, and fed fund effective rate- on predicting recession.

Fig 7: Direction and magnitude of impact of top variables on recession probabilities

We can see in this graph that S&P is low before the recessionary period but increases rapidly given greater stock market volatility in a recession. The table above also indicates that an increase in the S&P drawdown will decrease the probability of recession because we are predicting recession after 6 months.

Thus, our model proposes that a better method of predicting and understanding recession follows our top three variables- Fed Fund Effective Rate, S&P drawdown and percentage change in industrial production- and observe trends over a period of 6 months to predict the possibility of recession. Our model’s use of data available on a real time basis is a considerable factor in its favor, especially when this data can be used as an immediate predictor of recession. Using our model, we also try to predict the probability of recession for different months in 2023 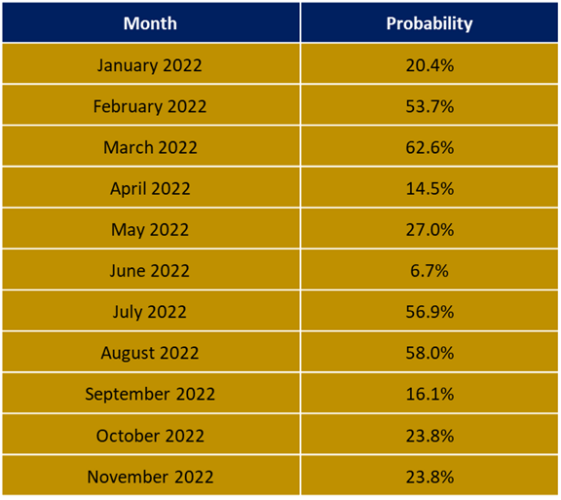 As seen in the table above, the probability of recession was very high in February and March per our model which is similar to the general economy predictions that the U.S. economy contracted in the first quarter as the trade deficit widened to a record high and a resurgence in COVID-19 infections curbed spending on services like recreation. The Commerce Department’s third estimate of gross domestic product showed some underlying softness in the economy, with consumer spending revised lower and inventories higher than reported last month with GDP falling at a 1.6% annualized rate last quarter. That was the first drop in GDP since the short and sharp pandemic recession nearly two years ago. Similarly, in the recession probabilities for July and August are predicted as high by our model and while the economic output contracted for two consecutive quarters in the first half of 2022, a strong labor market hinted that we are likely not in recession as the US produced 528,000 jobs in a month during July.

The model can thus have powerful implications for different macro and microeconomic stakeholders to adjust their policy measures well ahead in time based on the recession probabilities.