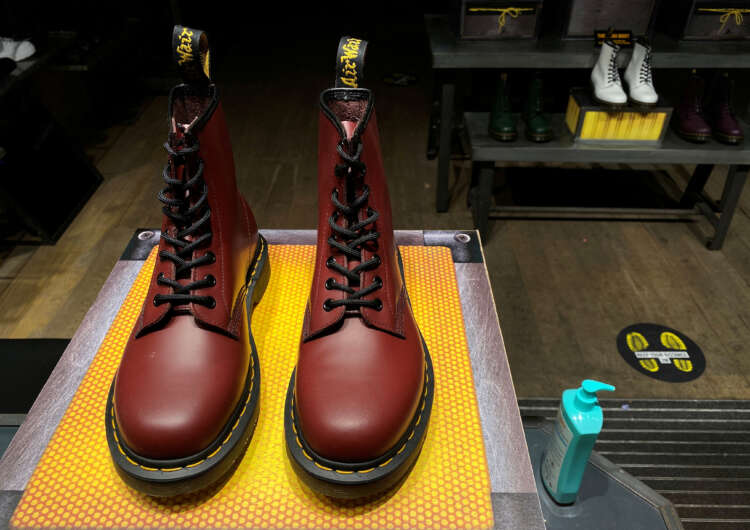 LONDON (Reuters) -Dr. Martens said revenue growth slowed in its third quarter, hammering its share price, after a drop in its wholesale business as it prioritised scarce inventory for online and retail stores channels.

Inventory levels at the British group, known for its chunky leather boots with yellow stitching, have been hurt by pandemic-linked manufacturing and global shipping delays.

The stock has lost a quarter of its value since listing at 370 pence in January 2021.

Earlier this month, the group’s biggest shareholder, private equity firm Permira, cut its stake by 6.5% to 36.4%, prompting a selloff.

The third-quarter outcome reflected a 33% jump in revenue in the higher margin direct to consumer (DTC) channels of e-commerce and retail stores, offset by a 14% fall in the wholesale business.

On a regional basis, revenues in Asia Pacific were the most impacted by COVID-19, declining 28%, with Australia and China particularly badly hit by renewed restrictions.

The group opened 11 new stores in the period, ending the quarter with 158.

“Docs” or “DMs”, popularised by crop-haired skinheads in the 1960s before later being adopted by other youth groups such as punks and goths, have become mainstream fashion.

“We remain confident in achieving market expectations for our first full year as a listed business, subject to no significant COVID impact in Q4,” Dr. Martens said.

Analysts, on average, forecast full-year core earnings of 257.3 million pounds, according to Refinitiv data, up from 224.2 million pounds in 2020-21.