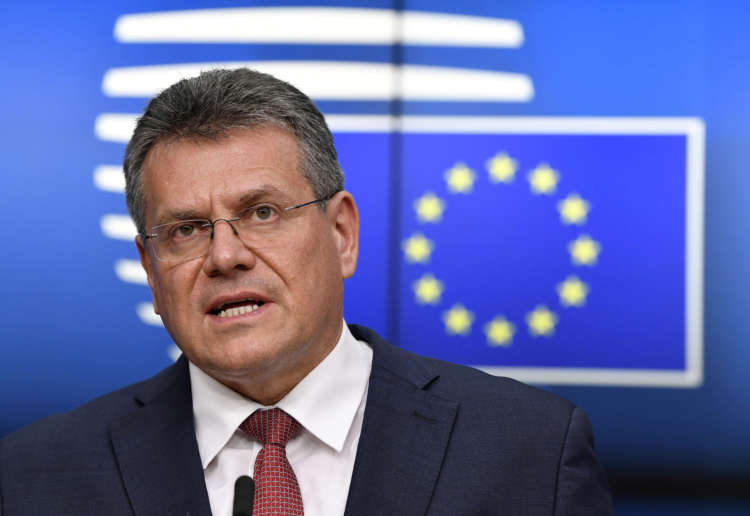 BRUSSELS (Reuters) – Britain must show it is fully using the avenues available under the Brexit divorce deal to minimise trade disruption in Northern Ireland before seeking concessions, a senior EU official said on Tuesday.

Britain’s exit from the EU’s trading orbit in January has created trade barriers between Northern Ireland – which remains in the EU’s single market for goods – and the rest of the United Kingdom.

Maros Sefcovic, a vice president of the European Commission, said he hoped to learn of British efforts during an online meeting on Wednesday .

“I was also reminding my British partners that this must be a two-way street,” he told a news conference.

Sefcovic said real-time access to the IT systems of customs could smooth customs processes and a trusted trader scheme could ensure Northern Irish supermarkets were properly supplied.

“I hope that tomorrow… we will get feedback from our UK partners on how all these flexibilities and grace periods are being used because it’s clearly a pre-requisite for the EU, the Commission and the member states to assess any further requests,” Sefcovic said.

The EU’s insistence on Britain honouring its withdrawal treaty has left the British province of Northern Ireland within the EU’s single market and put a customs border in the Irish Sea dividing the province from mainland Britain.

Sefcovic said that there were inevitable consequences of Brexit so not everything could be resolved.

However, Sefcovic said companies there might over time see the divorce arrangements as an advantage.

“Being in the single market and at the same time the internal market of the UK is actually a great business opportunity. And I hope that our joint work will amplify this possibility,” he said.