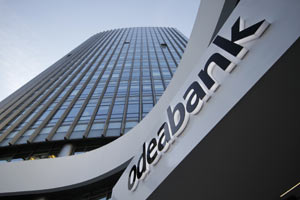 Being the first bank to obtain a license for a green field banking operation after a period of 15 years in the Turkish banking sector on 28 October 2011, Odeabank, the fully-owned subsidiary of Bank Audi, was granted an operating permission by the Banking Regulation and Supervision Agency (BRSA) on 2 October 2012. Odeabank was incorporated on 15 March 2012 and became the 49th player in the Turkish banking sector at that time.

Odeabank launched its operations on 1 November 2012. Leveraging its natural strengths as a mediator in trade and investment flows between Turkey and the MENA region, Odeabank is aiming to act as a full-service bank, providing its technological infrastructure and experienced human resources to the service of the Turkish economy. That involves building value-added franchises in areas such as retail banking and in providing a wide range of financial services for medium-sized Turkish corporates. 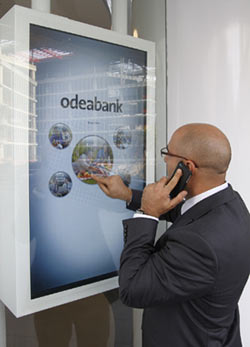 The Bank has expanded rapidly and by the end of December 2013, it reached 30 branches and more than 1000 employees allowing it to build-up assets in the amount of US$ 7.6 billion.Odeabank holds the 14th place in terms of asset size among deposit banks.

Odeabank’s shareholder, Lebanon based Bank Audi, is a regional group with presences in 11 different countries. With a universal bank profile, Bank Audi covers all segments of banking activities including corporate, commercial, retail, investment and private banking. Odeabank is well positioned to benefit from a range of synergies created by the international reach of Bank Audi. In recent years there has been a very discernible shift in the pattern of Turkey’s trade, with emerging market countries, especially those in the MENA region, becoming progressively more important. Concurrently, the EU’s share in Turkey’s total trade has declined. Imports between MENA and Turkey have increased 9 times and exports by a factor of 12 in the last 10 years.Given that Bank Audi has a presence in major MENA countries, including Qatar, UAE, Jordan and Saudi Arabia, synergies will be easily generated across the group as a whole. Additionally, with its local network and knowledge Odeabank is well positioned to act as an intermediary between investors in the region keen in increasing their exposure to the Turkish economy. 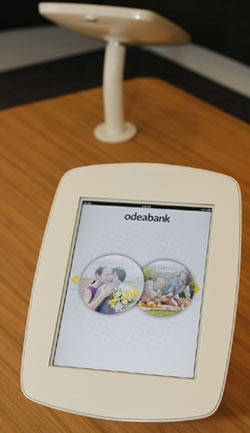 With the confidence and support of the shareholder, Odeabank takes firmer and stronger steps towards the target to be among “the giants’ league” in 2017.

In this sense, Odeabank is proud of breaking new grounds in the sector. In April 2013, for the first time in Turkey, Odeabank established an investment platform tailored for retail banking segment. After analyzing 400 mutual funds currently managed in Turkey in terms of 20 different criteria, the Bank collaborated with the esteemed portfolio companies to offer the funds to its customers.

By June 2013, the Bank presented its first credit card, Bank’O Card, to the service of our customers through a wide application channel. Being free of credit card fee, Bank’O Card is an exclusive product fulfilling the bank’s customers’ cash needs and providing many assistantship services.

By the end of October 2013, Odeabank has launched “Bank’O Card Axess” which proposes rewards program and installment facilities within more than 250 thousands of Akbank Merchants. Mainly, the cardholders can get instant cash back (chip-para) through every purchase they make and redeem them at that moment. In the meantime, they can get discounts and installments from the merchants. With special campaign management and targeted marketing activities, the cardholders can have customized offers such as extra installment for non-installment transactions, postpone installment and chip-point for only food purchases. 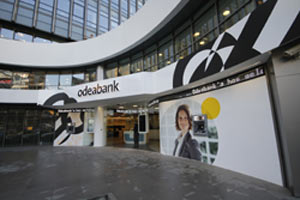 Cutting edge technologies allow customers to receive a bank card online in an instant and to speak to bank staff via a video call service. Odeabank also aims to make life easy for its employees who have access to internal video calls.What’s more, an automated cash counter and acceptance system has proven to increase efficiency by 40%.

Offering different services from its rivals, Odeabank has touch-screens located in branch windows, which may be used by anyone wanting information on its banking services. Odeabank designs the waiting lounges in its branches with customers in mind. It offers tablet devices and touch-operated tables, through which customers can access a wide range of interactive applications and games, making the time spent in the branch more efficient and enjoyable. The waiting lounges also have information screens which, as well as displaying sequence number and advertisements, also show market data and news on current affairs. Customer facing tablets are located on teller desks to enhance the retail banking experience by tailoring the interface and content to the customer’s needs. Odeabank not only adds another level of interaction between the customer and the teller, but it also provides the opportunity for the customer to monitor the transactions real-time and intervene where necessary, furthering the transparency. Odeabank as a whole has paperless and eco-friendly business processes and, using business intelligence applications, scorecards can be monitored and analyses can be executed over the related data. 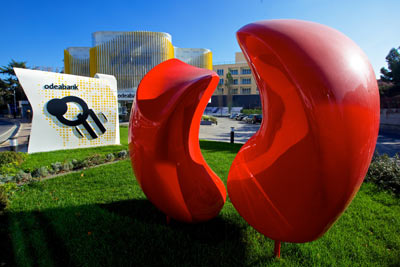 In spite of the Bank’s short history, its accomplishments are appreciated by international institutions. Odeabank was elected as “Turkey’s Most Innovative Bank” and “Turkey’s Best New Bank” by Global Banking and Finance Review in 2013.Moreover, Odeabank was also granted the “Most Innovative Bank Turkey 2013” award by International Finance Magazine and “Judges’ Special Mention Award 2013” by Banking Technology Awards. The Bank got also  “Best Self Service Business Intelligence Project– 2013” award by IDC. As a recent development, Odeabank was awarded “Most Innovative Customer Service Bank in Turkey – 2014” by Global Banking & Finance Review. Odeabank will confidently continue to grow supported by its technological infrastructure, more than 1000 endeavoring, enthusiastic employees and a well-diversified branch network.

CELEBRATING THE ARRIVAL OF SPRING