LONDON (Reuters) – The U.S. dollar hovered above a 2-1/2-month low versus major peers on Wednesday, as traders hung on to bets that the Federal Reserve would remain steadfast in its easy policy settings ahead of data expected to show a sharp rise in annual U.S. inflation.

Analysts forecast figures due at 1230 GMT to show a 3.6% lift in year-on-year prices, boosted by last April’s low base. The month-on-month forecast is for a modest 0.2% rise. 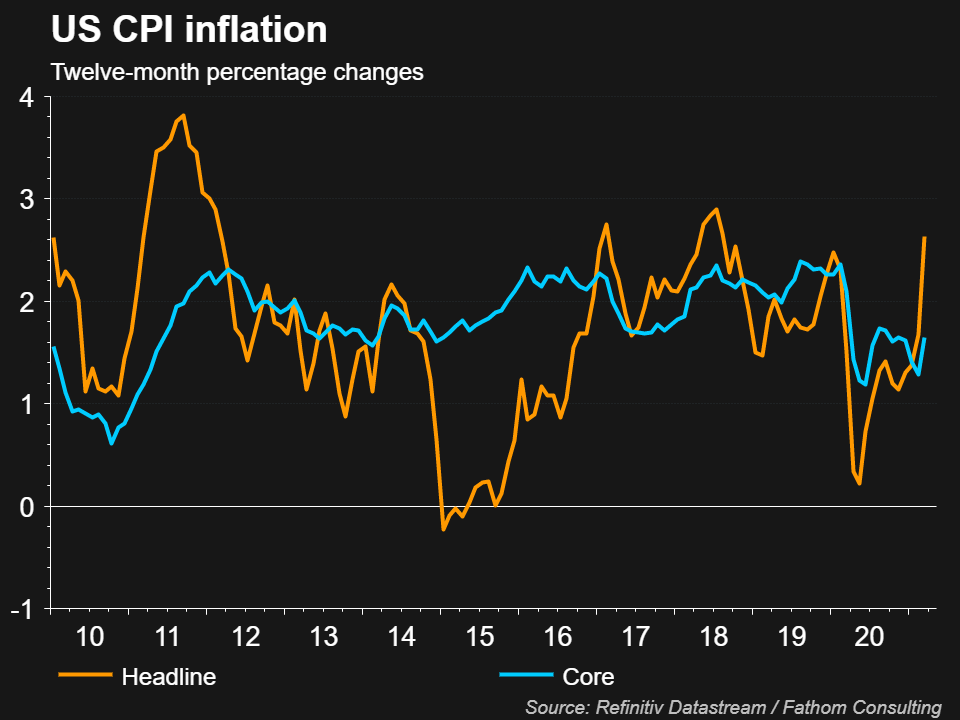 “We further expect that the release would highlight that, in addition to base effects in commodity prices, the U.S. inflation spike is driven by factors with greater staying power that could result in a more persistent inflation overshoot than expected by the Fed at present,” said Valentin Marinov, head of G10 FX research at Credit Agricole.

“This should, at least in theory, boost U.S. Treasury yields, help the dollar regain some ground and even rattle the global risk appetite.”

Higher numbers might add pressure on the Fed to bring forward rate rises, a worry which has contributed to a selloff in rate-sensitive tech shares this week. But currency markets have been soothed by repeated promises of patience from Fed speakers and the dollar has been pressured by gains in commodity currencies.

The greenback touched its weakest in more than two months against the euro on Tuesday, following a strong European growth survey, and it traded just shy of that level at $1.2133 in morning London deals. The yen fell 0.2% to 108.79 per dollar.

Risk aversion helped a gauge of the safe-haven dollar a fraction higher to 90.269 as selling pressure persisted in stock markets, but that still left the dollar index just above key support around 89.677 and 89.206.

Commodity currencies cooled their heels near milestone peaks, with the Aussie and kiwi sliding 0.5% to sit just below recent ten-week tops, while the Canadian dollar was little changed just shy of Tuesday’s almost four-year high. [AUD/]

“As long as the equity market doesn’t experience a more drastic correction, the dollar is unlikely to get a safe-haven bid,” said Rodrigo Catril, a senior currency strategist at National Australia Bank in Sydney.

“We know now that the Fed is very much firmly committed to easy policy,” he said, a view reinforced by recent comments from Fed members that have made Dallas Fed President Robert Kaplan’s mention of tapering support last month look like an outlier.

“Everybody else has come out firmly saying it’s not the time…and that’s a dollar negative story.”

“Remaining patient through the transitory surge associated with reopening will help ensure that the underlying economic momentum that will be needed to reach our goals as some current tailwinds shift to headwinds is not curtailed by a premature tightening of financial conditions,” she said.

Nominal U.S. yields crept higher with the focus on inflation, but real yields remain negative and under pressure.

The U.S. currency is also being weighed down by the improving global growth outlook, which tends to draw investors’ cash to emerging markets, and by big and growing U.S. trade and current account deficits which also send dollars abroad.

The dollar index is “finding some risk aversion-related stability just above 90” amid the sell-off in equities, “but it’s unlikely to morph into any meaningful upside,” Westpac strategists wrote in a report.

“Fedspeak continues to underscore the patient pledge,” while the “eurozone’s rebound metrics continue to close the gap with the U.S.,” keeping the dollar index heavy through the next several months, they said.

(Reporting by Ritvik Carvalho; additional reporting by Tom Westbrook in Singapore and Kevin Buckland in Tokyo, Editing by William Maclean)