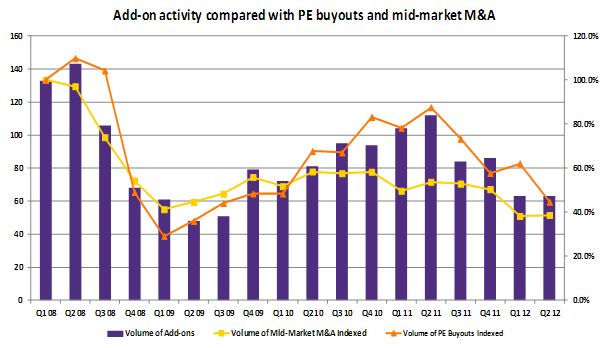 London – Silverfleet Capital, in conjunction with mergermarket, today publishes the findings of its Buy & Build Monitor for Q2 2012, which indicates that add-on activity in Europe has remained at the subdued levels seen in Q1 2012 and below even the weak H2 2011.

The volume of Buy & Build activity in Europe in Q2 2012 remained broadly flat at the level seen in Q1 2012, with 63 add-ons completed in both quarters, and this level was the lowest of any quarter since the nadir in mid-2009. However, the average disclosed value of add-ons rose to £45 million, up 72% from a very modest average disclosed value of £26 million in Q1 2012 but still significantly lower than for example the average of £70 million seen in Q3 2011.

Commenting on the findings, Neil MacDougall, Managing Partner of Silverfleet Capital said: “The lower level of Buy & Build activity that we have observed since the real onset of the Eurozone sovereign debt crisis in mid 2011 continued through Q2 2012 with overall activity still very subdued and only slightly above the trough seen in mid-2009.

However, since the ECB’s LTROs we continue to see renewed interest in LBOs from a broader range of lenders especially in France and Germany. It is therefore no co-incidence that Q2 2012 saw a notable resurgence of Buy & Build activity in France especially by French acquirers who completed 10 out of the 13 add-on transactions in that country.

However, in overall terms it is likely that weakening demand and confidence in both domestic and foreign markets is the main explanation for continuing lacklustre Buy & Build activity in Europe.”
Below is an updated graph of the quarterly performance of European add-on activity shown against a mid-market M&A activity index and an index of overall European PE buyout activity based on data provided by Private Equity Insight.

During the second quarter of 2012 the reduced Buy & Build activity seen in the first quarter continued. The number of add-ons remained flat at the Q1 2012 level of 63, below the weak Q3 and Q4 2011 add-on levels of 84 and 86 respectively, and the lowest level since Q3 2009, when a mere 51 add-on acquisitions were completed. Meanwhile, the average disclosed add-on value in Q2 2012 rebounded from the first quarter, rising to £45 million (versus £26 million), albeit this average value is based on a small number of deals and is still at the lower end of the historic range.

As in the past the volume of add-on deals has broadly tracked the trend in the mid-market M&A index as well as the volume of PE buyouts in Europe. We note that further data usually emerges well after the end of the quarter for both buyouts and buy & build transactions and that Q1 2012 was no exception with the figures for both have been revised upwards since our last report.

The table below shows the geographic split of the location of the targets that have been acquired in the quarter compared to Q1 2012. It should be noted that from one quarter to the next there is some volatility to be expected given the smaller number of data points. The table below also shows that France was the most active market followed by the UK, Germany and the Nordic region which together accounted for around two thirds of European Buy & Build activity in the quarter and appear to be relatively resilient despite the well documented problems in other parts of the region. 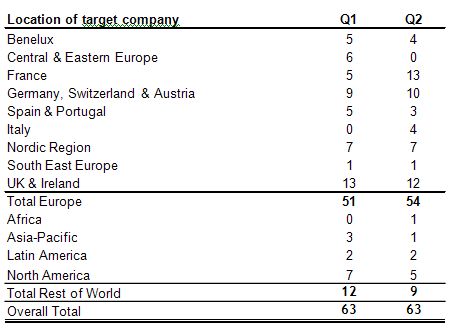 The data prepared by mergermarket only includes add-on acquisitions made by companies with over 30% of their equity held by a private equity fund where the platform business is a European company. In addition, the value of the add-on needs to exceed €5 million or else the target should have at least €10 million of sales to be included.
Silverfleet Capital

Silverfleet Capital has been an active European mid-market private equity investor for more than 25 years. Silverfleet Capital works with the management teams of their investee companies to realise “buy to build” strategies. This means working with companies to create value by accelerating their growth through investment for example in new products, production capacity or people, or rolling out successful retail formats or through making follow-on acquisitions also known as Buy & Build. Our portfolio has made approximately 110 follow-on acquisitions since 2000.

Silverfleet Capital invested in Aesica, the pharmaceutical contract manufacturing organisation in October 2011, Office, the UK footwear business in December 2010 and Schneider, a leading German catalogue and on-line retailer of fashion, lifestyle and promotional products in October 2010. Schneider, Office and Aesica are the second, third and fourth investments from the current fund following the acquisition of Kalle, a leading global producer of artificial sausage casings, in September 2009. The fund is now approximately 40% invested.

Silverfleet Capital manages approximately €1 billion and has offices in London, Paris, Munich and Chicago. This office network enables Silverfleet Capital to execute complex, multi-jurisdictional investments as well as to support investee companies with both domestic and international buy and build strategies.