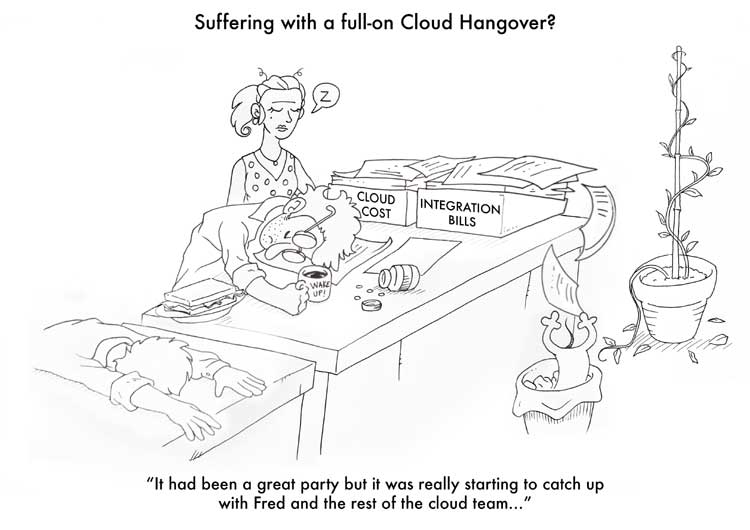 Research from Sungard Availability Services® finds that unexpected costs, integration challenges and increased IT complexity are all contributing to a ‘Cloud Hangover’

Sungard Availability Services® (Sungard AS), a leading provider of information availability through managed IT, cloud and recovery services announced research which reveals that businesses are spending over £1bn each year on maintaining cloud services, hidden costs and teething problems associated with their cloud computing projects. The research questioned 150 senior IT decision makers in the UK in organisations with more than 500 employees, with an average cloud spend of £700,000 in the last year.

Long considered a more flexible and simpler approach to managing IT, cloud computing has ushered in a new era of IT. However, the research reveals that organisations are now facing a large number of challenges in managing and operating these cloud environments.

Unexpected Costs in the Cloud

The research revealed that the overwhelming majority of businesses in the UK have encountered some form of unplanned cloud spend (87 per cent) – slightly higher than the European* average of 81 per cent. Not only is each UK organisation paying an average of £200,000 per year to ensure cloud services run effectively, but also an additional £270,000 over the last five years thanks to unforeseen costs such as people to manage deployment (44 per cent), internal software maintenance (42 per cent) and systems integration (40 per cent).

Worryingly, over two-fifths (43 per cent) of organisations have been stung by unplanned spending for costs around managing their cloud service provider – suggesting that some vendors may not be being as transparent as they should during the initial consultancy phase.

Moreover, although over half of businesses (55 per cent) cited reduced IT costs as an expected return-on-investment in adopting cloud services, nearly a third (28 per cent) believe this has not been achieved.

Interestingly, respondents from the UK and France reported significantly higher levels of unplanned cloud spend (£270,000 and £430,000 respectively) than IT decision-makers from Ireland (£150,000) and Sweden (£230,000) and only 54%  of Irish respondents had encountered unplanned spend on cloud.

Commenting on the findings, Keith Tilley, Executive Vice President, Global Sales & Customer Services Management at Sungard Availability Services®, said: “This gap seems to point to the level of market adoption within the regions – with the UK and France investing in cloud services earlier on, while Ireland and Sweden have potentially joined the cloud hype phase a little later, where some key learnings have already been shared more widely across the industry.”

Despite being touted as a way to reduce IT complexity, almost half (45 per cent) of UK respondents said that cloud had in fact increased the complexity of their IT infrastructure. Meanwhile, 70 per cent claimed that cloud computing added a new set of IT challenges – with interoperability between their existing IT estate and their cloud platforms considered by 42 per cent as the biggest issue.

Keith Tilley continued: “When it first emerged, cloud was promised as a cure-all for any and every IT headache. However, as the market has matured, it has become clear that some organisations are now left with what we might call a ‘cloud hangover’.

“By getting caught up in the hype, some organisations were quick to adopt the cloud without linking it back to their wider business goals and failed to see the additional considerations such as interoperability, availability and the operational expenditure linked to cloud. Whilst organisations can indeed see incredible benefits from cloud computing including agility, flexibility and cost savings, the cloud needs to be deployed on a case-by-case basis in line with business goals and the nature of the application or the workload. This research shows that organisations no longer need the enthusiasm and jargon of cloud evangelists but require practical advice for building a reliable, robust and available infrastructure – in short, a cloud therapist!”

“Like many things in life, if it looks like it’s too good to be true then it probably is!” commented David Halfacre, Head of information Services at Fujifilm. “There is no denying that IT innovation can be exciting. However, the best IT decision makers are ones who can approach the cloud from a business perspective and using IT only as a way to support and achieve the overall strategic aims of the organisation. This is how the industry should be approaching cloud computing: as a tool to deliver business demands.”

John Turner, IT Director at accountancy firm BDO, commented: “As a business, one of the most crucial lessons we learnt is that cloud, while a vital tool for modern business, is not a ‘one-size-fits-all’. Cloud computing is not the end result, it is a method through which organisations can achieve their business priorities – whether this is growth, increasing flexibility, deploying a mobile workforce or streamlining control of overall infrastructure.

“Managed Services has been essential in helping us make crucial IT decisions for BDO. We need a technology partner  that we can trust – not only to help us develop the correct strategy but also in explaining the best options available to execute those plans and ensure we achieve our desired business outcomes.”

Kate Hanaghan, Research Director, Infrastructure Services at TechMarketView commented: “Despite there being genuine interest and growing excitement in cloud services from buyers, we firmly believe the migration of large swathes of corporate IT into the cloud will happen over a period of years, not months. The meteoric rise of some cloud pure-players has led certain IT buyers to believe cloud is ‘cheap and easy’. In fact, for most organisations the transition to a hybrid computing environment is highly complex, and getting to that end point will require a great deal of help from experienced services firms.”