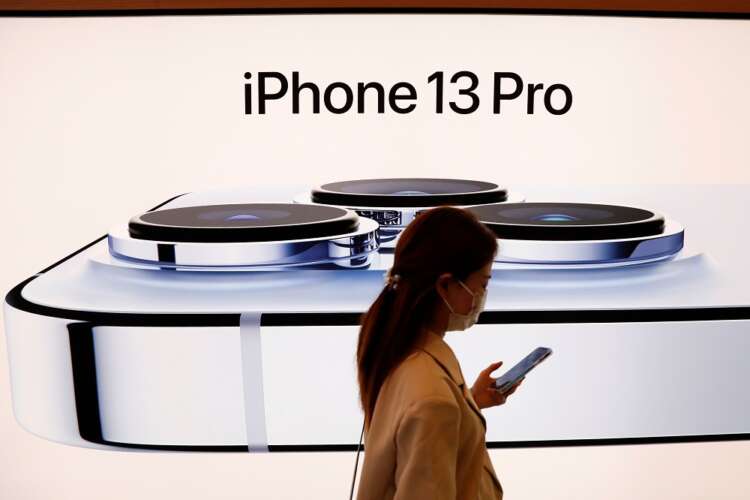 (Reuters) -Apple Inc has told its parts suppliers demand for the iPhone 13 lineup has slowed, Bloomberg News reported https://www.bloomberg.com/news/articles/2021-12-02/apple-tells-suppliers-iphone-demand-has-slowed-as-holidays-near-kwobgrxr?sref=PFCuwcPr&utm_source=twitter&utm_content=business&cmpid=socialflow-twitter-business&utm_campaign=socialflow-organic&utm_medium=social on Wednesday, a move that signals a declining interest among consumers for the usually coveted latest upgrades.

The company had cut production of iPhone 13 by as many as 10 million units, down from a target of 90 million, due to a global chip shortage, but now it has informed vendors even those numbers look unlikely, the report said.

Apple’s shares fell over 3%, dragging down those of iPhone component and semiconductor suppliers Qualcomm, Skyworks, Europe’s ASML and Infineon.

Apple and its suppliers did not respond to Reuters requests for comments.

The holiday season is Apple’s biggest quarter and typically so, for its most important product, the iPhones, which start at $699 and go as high as $1,600.

Analysts had expected demand to remain steady for new products, but lowered shipping estimates as supply-chain issues burdened the company as well as many retailers who faced inventory shortages.

Consumers, who splurged on new phones and laptops during the peak of the pandemic as they stayed indoors, are now spending more on vacations and outdoor activities.

“As lockdowns eased, spending returned on these experiential activities, so may be less for the new iPhone. We believe that (iPhone) demand is likely to be pushed out in 2022,” Counterpoint Research analyst Tarun Pathak said.

IDC analyst Ryan Reith believed it is not so much as demand for smartphones was drying up, but U.S. consumer spending was slowing due to the pandemic.

Apple Chief Executive Officer Tim Cook warned in October that the impact of supply constraints, which cost the company $6 billion in sales in the fourth quarter, will be worse during the holiday quarter even as demand for the new lineup was robust.

How to Navigate Regulations When Doing Business Overseas