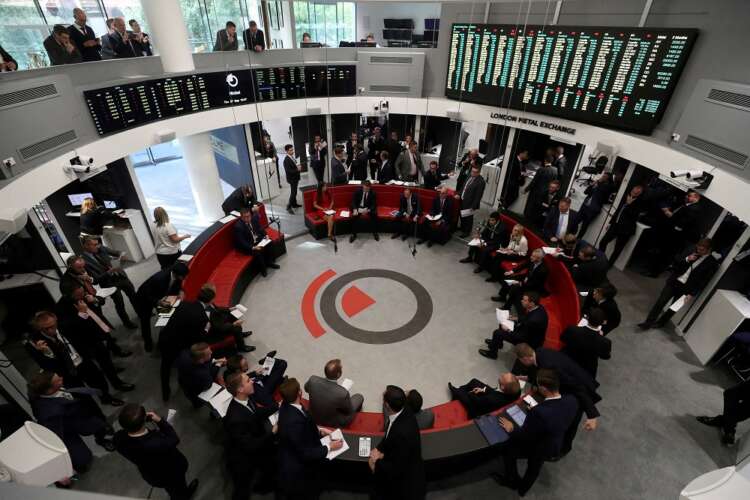 LONDON (Reuters) – The London Metal Exchange faces a struggle to regain its dominant position in global nickel trading as volumes slide and participants flee an increasingly volatile market in the wake of trade mayhem earlier this year.

Nickel volumes on the world’s oldest and largest venue for trading metals collapsed after the LME suspended its contract for a week and cancelled all trades on March 8, when prices doubled in a few hours to a record above $100,000 a tonne.

“Volumes may well be down because there is still a certain lack of trust in the LME after the debacle in March,” said Wood Mackenzie analyst Andrew Mitchell. “LME nickel does not represent the bulk of the market.”

The nickel that can be delivered against the LME’s contract will this year amount to only 650,000 tonnes or around 21% of global production compared with 50% in 2012, Macquarie analyst Jim Lennon said.

The exchange says it is working on potential improvements.

“The LME is actively engaging with nickel market users to consider…potential enhancements to its nickel contract and additional measures to address the growing market in nickel and its different forms,” the exchange told Reuters in response to a request for comment. “We look forward to sharing plans in due course.” (Graphics: LME nickel volumes, https://fingfx.thomsonreuters.com/gfx/ce/akvezbjyopr/aaaaaaLME%20nickel%20volumes.PNG)

Several traders believe the LME’s nickel contract will never recover as the low liquidity has created a vicious circle of falling volumes and extreme price volatility.

Volatility and rising supplies of Indonesian nickel pig iron (NPI) used to make stainless steel are spurring the shift away from the LME contract. NPI is a low grade cheaper alternative to pure nickel metal.

NPI, which can’t be delivered against the LME’s contract, is expected to account for more than 50% of global supplies this year at 3.1 million tonnes from 12% in 2010, Mitchell said.

NPI is not traded on the Shanghai Futures Exchange either. ShFE offers a nickel metal contract that is highly correlated with the benchmark LME nickel contract.

“The LME contract is imperfect in the context of how the market has evolved. There are different pockets and the LME contract caters for just one of those pockets,” said Michael Widmer, an analyst at Bank of America.

Nickel sulphate, used to make the cathode component of electric vehicle batteries is another product. Sulphate can be made from nickel briquettes stored in LME registered warehouses.

But LME nickel stocks are depleted and sulphate is now being made from nickel matte, a product that can be made from nickel pig iron (NPI), and another intermediate product known as mixed hydroxide precipitate (MHP) produced in Indonesia.

Rival exchange CME Group is looking into launching a nickel sulphate contract, according to sources. It declined to comment on how its plans were progressing.

Stainless steel mills, many in China, consume about two-thirds of global nickel supplies. Electric vehicle batteries are expected to take a larger share as sales surge due to the energy transition; around 30% by 2030 compared with 15% last year.