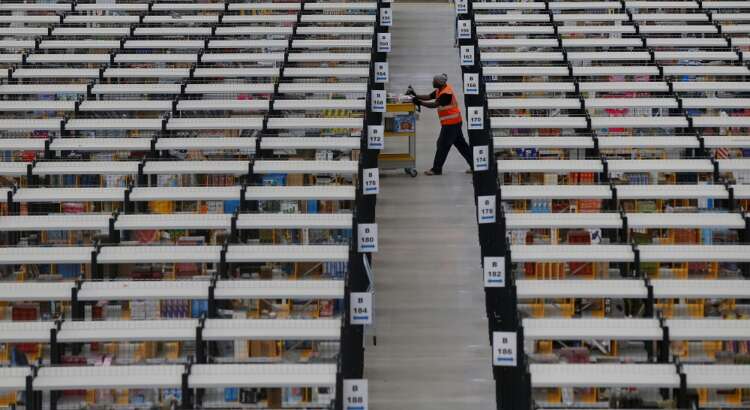 LONDON (Reuters) -Amazon said on Tuesday it has started recruiting for 20,000 seasonal positions across the United Kingdom to cover upcoming peak trading times, which include Christmas, joining a battle for temporary workers in a tight labour market.

The group, which has 55,000 permanent UK employees, said the temporary jobs would be in its network of fulfilment centres, sort centres and delivery stations.

Amazon UK said pay for operations roles would start at a minimum of 10 pounds ($13.68) an hour, rising to 11.10 pounds an hour in some parts of the country – rates in line with a pay rise given to permanent employees in June.

The group is also looking for people to deliver parcels in their spare time for between 13 pounds and 15 pounds per hour.

Reuters reported on Monday that warehouses in Britain are having to pay up to 30% more to recruit staff after a chronic shortage of workers exacerbated pressure on already buckling supply chains and threatened to derail the run up to Black Friday and Christmas.

The labour shortages in Britain’s logistics network come on top of a spike in European natural gas prices and a post-Brexit and COVID shortage of truck drivers that has left fuel pumps dry across major cities.

Amazon UK has not experienced delays in deliveries to customers, a person with knowledge of the situation told Reuters.

Addressing the root cause of today’s growing commerce crisis