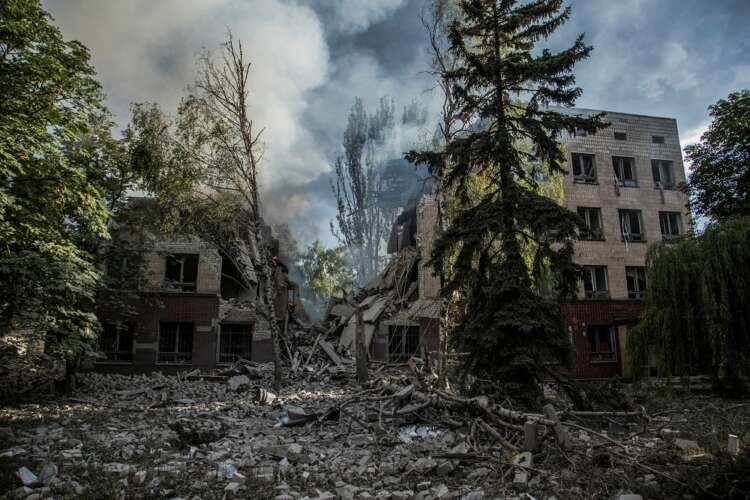 KYIV (Reuters) – Ukrainian forces will try to hold the line against Russia in the east from the vantage point of the city of Lysychansk, buying time for the arrival of Western weapons and the region’s defenders to prepare fortifications, Luhansk province’s governor said.

Moscow is pouring in forces to try to surround Lysychansk, a vital stronghold for Kyiv in the eastern Donbas region, Governor Serhiy Gaidai said in an interview.

Ukrainian forces pulled back from neighbouring Sieivierodonetsk last week after holding out for weeks, Kyiv’s biggest battlefield setback for more than a month.

It will be harder for Russia to capture Lysychansk which lies on elevated ground, but it is difficult to say how long it will hold, Gaidai said late on Monday.

“What are the Russians doing? They just shell positions for days, weeks and months from long range…How long can it hold? This is less a question for the soldiers and more a question of concrete. How long will the fortifications last,” he said.

Lysychansk is the last major Ukrainian-held urban area in Luhansk, one of two provinces that make up the industrial Donbas heartland that Russia is trying to capture on behalf of separatist proxies.

Ukrainian forces held onto Sievierodonetsk, just across the Siverskyi Donets River from Lysychansk for weeks, weathering a ferocious Russian assault.

“They’ll achieve nothing in several days (in Lysychansk) like they’re saying (they will),” Gaidai said.

“The geography of (Lysychansk) is difficult. It’s very spread out. It has a private (residential) sector, there are 9-storey apartment blocks, it has drops, there are lowlands and there are rises,” he said.

The city’s pre-war population of 100,000 has dwindled to just 15,000, people who simply do not want to leave despite the pleas of the authorities and repeated evacuations, he said.

“With the loss of Lysychansk, we will unfortunately be able to say that Luhansk region is lost,” he said. “But…this would be a lost battle but not war.”

“Our task is to hold back the enemy as long as possible and to inflict maximum damage on them… As long as Russia’s army remains in one place, time is on our side. We will receive weapons from the West…” he said.

Asked if the Western arms supplies were already having an impact, he said “they are helping” but that “they are far from the critical amount” needed.

(Writing in Melbourne by Lidia Kelly, Editing by Angus MacSwan)