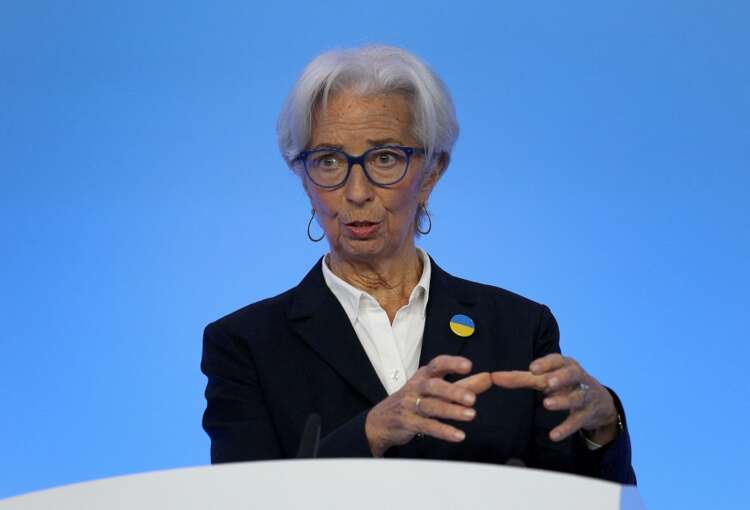 By Francesco Canepa and Balazs Koranyi

With the ECB nearing its first interest rate hike in over a decade, bond yields for Italy and other indebted countries have surged and the spread they pay over safe-haven Germany has widened.

This has spurred the ECB to speed up work on a new, yet to be unveiled, bond-buying programme. Policymakers have yet to agree on the details of the scheme but most agreed the ECB had to intervene if markets moved out of synch with fundamentals.

Lagarde’s comments suggested this new scheme was likely to come with some strings attached for countries that benefit from it, as sources told Reuters earlier this month.

“The new instrument will have to be effective, while being proportionate and containing sufficient safeguards to preserve the impetus of member states towards a sound fiscal policy,” Lagarde told the ECB’s annual forum in Sintra, Portugal.

Sources told Reuters these conditions would be relatively light, such as complying with the European Commission’s economic recommendations that countries already have to abide by to secure funding from the European Union.

The sources have also said the ECB would likely drain cash from the banking system to offset the new bond purchases, so as not to increase the overall amount of liquidity.

Speaking to Reuters, Belgian central bank governor Pierre Wunsch even said the ECB’s scheme should be limitless and come without onerous conditions but that the central bank should only grant it to countries with credible fiscal plans.

The ECB has also said it would also channel proceeds from bonds maturing in its 1.7 trillion euros Pandemic Emergency Purchase Programme towards countries where spreads are wide – in a move that Lagarde said would start on July 1.

The ECB plans to raise its interest rates by 25 basis points on July 21 but has opened the door to a bigger move in September unless its medium term inflation forecasts are cut back to its 2% target.

With the outlook for both growth and inflation uncertain, Lagarde hinted at small increments “but with the option to act decisively”.

“This means moving gradually if there is uncertainty about the outlook, but with the option to act decisively on any deterioration in medium-term inflation, especially if there are signs of a de-anchoring of inflation expectations,” she said.

The ECB’s rate on deposit is currently -0.5%, meaning banks are charged for parking cash at the central bank. Its weekly lending rate is zero.