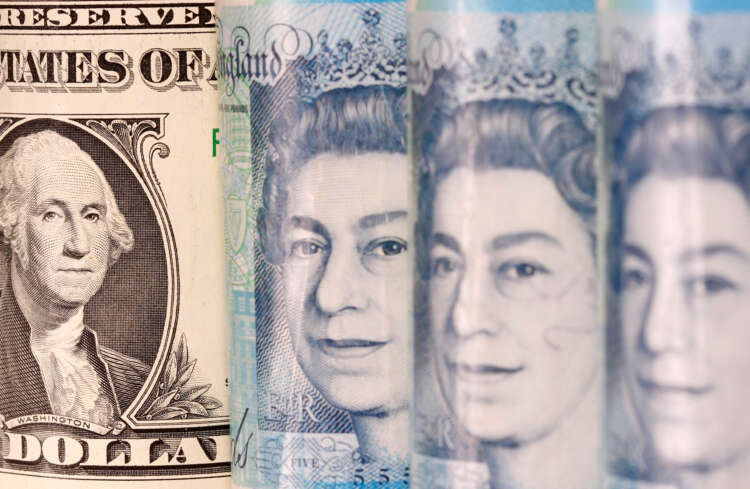 LONDON (Reuters) – The British pound fell on Monday to its lowest in three weeks versus the U.S. dollar, as investors sold riskier assets amid expectations of Fed tightening, mounting tensions with Russia and falling stocks.

The market is bracing for a U.S. Federal Reserve meeting this week that could signal the removal of its vast stimulus programme.

The United States also said on Sunday it was ordering diplomats’ family members to leave Ukraine, in one of the clearest signs yet that Washington is bracing for an aggressive Russian move in the region.

The dollar rose and riskier currencies such as the British pound and Australian dollar suffered.

“The PMIs aren’t telling us much new. Growth conditions were impacted by the arrival of Omicron, supply-chain pressures are starting to ease, and labour market shortages/disruptions continue to fuel a more persistent inflation backdrop,” Simon Harvey, head of FX analysis at Monex Europe, said.

Investors expect the Bank of England to hike rates in February, after data showed on Wednesday that UK inflation rose faster than expected to its highest in nearly 30 years in December.

The pound also touched a one-month low versus the Japanese yen, after the pair tumbled 1.4% last week.

An investigation into boozy parties at the official residence of British Prime Minister Boris Johnson during Britain’s 2020 lockdown is due to be published this week.

“We saw early in the European trading session today that pressure on the pound was largely centred on the increased probability of Johnson’s resignation this week, but as the morning has gone on a broader USD bid along with deteriorating PMIs has extended the pound’s losses,” Monex Europe’s Simon Harvey said.

Other analysts said the investigation had not had an impact on the pound.

“We do not expect heightened political uncertainty to materially impact pound performance given there is unlikely to be any near-term change in government policies,” MUFG currency analyst Lee Hardman wrote in a client note.

ING FX strategists Chris Turner and Francesco Pesole told clients: “Politics has yet to hit GBP on the view that even if PM Johnson were to resign, Chancellor (finance minister Rishi) Sunak would be seen as a safe pair of hands as an alternative.”

The scale of DDoS attacks against the finance industry