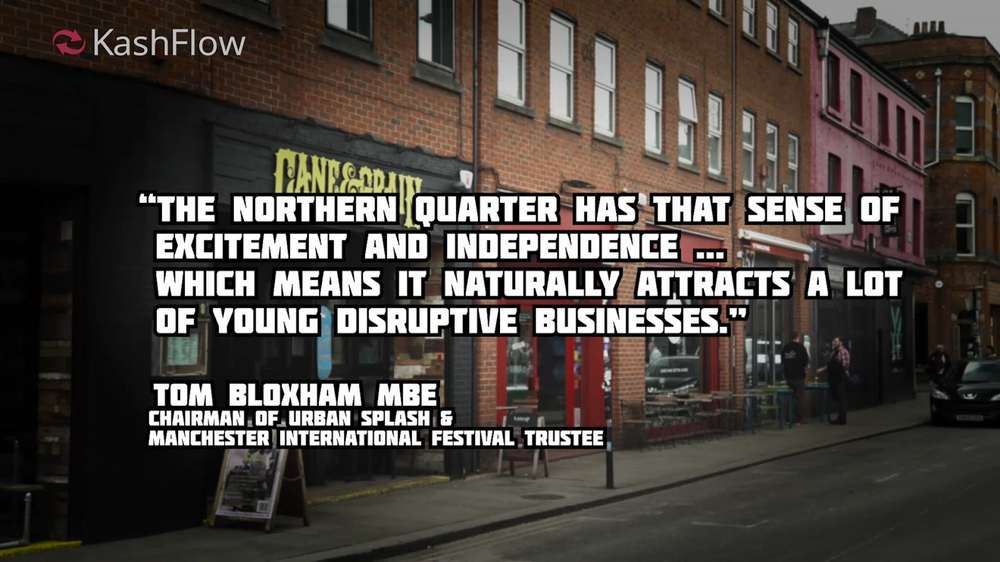 A new documentary, released by accounting, payroll and HR software provider KashFlow, explores why Manchester’s Northern Quarter is experiencing unprecedented growth while nearby bricks and mortar chain stores are notoriously struggling. Manchester is renowned as a thriving hub for businesses in general, and the Northern Quarter, in particular, is very popular with independents, entrepreneurs and freelancers.

Data released by Inform Direct in their Review of UK Company Formations revealed that Greater Manchester was the most active area in England, outside of London, for companies to start up in 2017. In particular, the Ancoats and Clayton ward – which includes parts of the Northern Quarter – was found to have had more businesses open than close in the region last year.

KashFlow, which has office space in Manchester city centre, commissioned the documentary after reflecting on the fact that many of their clients and contacts based in the Northern Quarter had unique and inspiring stories to tell about their businesses. The software provider interviewed small business owners from a variety of different sectors, who operate from the district, to share their stories and explore why the area is so popular for entrepreneurs.

Common themes that arose were the unrivalled community spirit and the electric atmosphere that makes business owners believe anything could be possible. According to those interviewed – including owners of Cloudwater Brewery, co-working cafe Ziferblat and healthy fast food chain Kettlebell Kitchen – the area breeds creativity and encourages people to be expressive, something which attracts budding entrepreneurs.

“Seeing small businesses thrive in areas like Manchester’s Northern Quarter reminds us why we do what we do at KashFlow – it’s to help them succeed and focus on what they love.

“Being able to get out amongst those driving Manchester’s creative community allows us to see small businesses in action and champion their efforts. There’s some fantastic businesses cropping up across the UK, and some equally fantastic established ones too.

“It’s our honour to celebrate their efforts and get as many eyes on the UK small business scene as possible.”

“Around twenty years ago, the Northern Quarter was in terminal decline. Myself and others had a vision of getting people back to the area by encouraging independent retailers and artists to set up shop here and make it the bohemian area of Manchester. Nowadays, the Northern Quarter has that sense of excitement, independence and disruption, which means it naturally attracts a lot of young, disruptive businesses.

“When I was younger, running your own business was seen as a slightly maverick sort of thing to do. Starting a business is now very aspirational, which is great as people learn so much running their own businesses, whether they succeed or fail.”

The aim of KashFlow’s documentary is to celebrate the thriving startup and small business scene in Manchester city centre and independent quarters in general. KashFlow is keen to champion the small business owners it works with, using its brand status and large audience pool to help promote British entrepreneurs.

The software provider is primarily popular with small businesses, startups and the self-employed.