Megabank has been operating in Ukraine for over 30 years and is one of the oldest and largest commercial banks in the country. Oleksii Iatsenko has been working in the banking sector and at Megabank JSC, in particular, since 2003. He began his career as an economist and has held various positions in the bank since then, and is currently the chairman of the management board. During his years of work in the top management of Megabank, it has entered the top twenty most reliable banks in Ukraine according to various rating agencies. The shareholders of Megabank are the European Bank for Reconstruction and Development (EBRD), the German State Bank (KfW) and the International Finance Corporation (IFC). 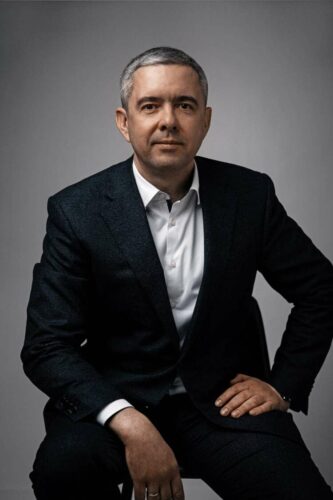 Oleksii Iatsenko, Chairman of the Management Board, MEGABANK JSC, Ukraine

When Global Banking & Finance Review editor Wanda Rich spoke with Oleksii, he explained that the shareholders have been involved at each stage of Megabank’s strategy, which he cites as key to the bank’s development. “In the late 90s, a timely decision was made to open branches in the territory of Ukraine, and in 2005 it was decided to implement corporate governance, which was based on best European practices,” he said.

“As a result, since 2006, Megabank has been cooperating with international financial institutions such as the World Bank, the EBRD and the IFC. One of the most important stages in the activities and development of the bank was the inclusion of international organisations in the shareholders’ structure. Thus, since 2009, the shareholders of Megabank are the EBRD (11.29%), the German State Bank KfW (11.29%) and the IFC (4.53%).”

He believes that the bank’s universality has played a positive role in its development. “For many years, the main focus of our activities has been small and medium-sized businesses. This allows us to ensure good diversification of the bank’s assets.”

He also discussed how product development is steered heavily by the increased need for technological innovation and the convenience it brings to clients. “One of the unique products of Megabank, which also influenced the development of the bank, was the Integral Clearing Centre (ICC) to pay for housing and utilities services,” Oleksii said.

He explained that this integral payment system was created primarily to facilitate customer convenience when paying for multiple services. “Instead of five to six payment documents, consumers began to receive a single bill. Gradually, the bank began to transform its services into digital channels. This process was also applied to users of the Integral Clearing Centre.

“As a result, today this information service allows consumers to pay for utilities services both offline and online, using convenient payment methods and saving time and money,” he continued. “With regards to savings, this applies to the commission that banks usually charge customers for transactions. Using the ICC channels, a person has the opportunity to not pay a commission.”

Digitalisation has also been developed in Megabank’s other banking services. “In 2019, we launched the digital bank todobank,” he said. “It was the second neobank in the country. The unique difference of this platform to others is that it remains open to absolutely all clients. To start using the bank’s service, a person only needs to install a mobile application on his phone – it is not necessary to have a card issued by Megabank. Since the launch of todobank in Ukraine, the application has been downloaded by more than 300,000 users to their phones. We also provide users with the opportunity to conveniently pay for utilities services. It is possible to pay all utility suppliers in todobank at once, as well as on the ICC website, with one payment and without paying any commission.”

They are continuing to develop the mobile application today, supplementing it with new services. “In 2022, it is planned to launch an updated version, todobank 2.0, where Megabank intends to please its clients with a large number of new features. These will be the most modern services available on the Ukrainian market.”

Megabank’s improved digital offering has had a positive effect on both its customer service level and its profits. “We understand that clients want to solve their financial problems today and now,” Oleksii acknowledged. “At the same time, they want to use the devices they have at hand and perform banking transactions from anywhere in the world and at any time. The availability of digital banking makes it possible to meet client demand, and market requirements in general.”

In terms of profit, he noted that the transfer of most services from branches to digital channels has allowed Megabank to significantly reduce its costs. “It is important that the bank has the opportunity to maintain and increase the volume of banking transactions and, accordingly, increase profits.”

One of the areas where Megabank excels is the full range of services it provides to small and medium-sized businesses, and how it addresses the way their needs differ to those of corporate clients. “One of the bank’s competitive advantages is that we offer all services that are available to the corporate segment to small and medium-sized businesses,” Oleksii said. “At the same time, Megabank is trying to find an individual approach for each client, which would be able to solve their issues as profitably and effectively as possible.

“Short-term and unsecured loans in the form of a credit limit on the current account, classic lending, lending for investment purposes, lending under government support programmes related to the COVID-19 pandemic, sectoral economy – all are available to small and medium-sized business clients,” he went on. “Representatives of SMEs also have access to the full range of documentary transactions, letters of credit, avalisation of bills, servicing of foreign trade agreements and more.

“In addition, for the micro-client and private entrepreneur segment, Megabank plans to allow remote account opening in todobank version 2.0. Therefore, we will be able to serve this segment through the application later this year.”

Oleksii describes banks as the “blood system” of any country’s economy. For this reason, he believes that Megabank has a role to play in supporting the social and economic development of Ukraine. “Financial institutions are always the first ones to feel the effects of any crises and difficulties clients have,” he observed. “That is why financial institutions should also be the first to provide the foundation for the economic growth and social development of a country. The objective of banks in this process is to provide financing and lending to enterprises of all sizes and forms of ownership for their development.”

Finally, Oleksii outlined the bank’s five-year strategic plan and the areas of development that it will be focusing on. “The target indicators of Megabank JSC’s strategy were updated in April 2021,” he confirmed. “The strategy envisages an increase in return on assets of up to 2.5% and an increase in return on capital of up to 15% by the end of 2025. Capitalisation forecast to increase by 70% due to increased profitability of the bank.

“The bank plans to achieve such results by means of the development of lending to SME and microbusiness segments, as well as retail lending products such as todobank and consumer and mortgage loans. One of the key segments in terms of economic sectors for Megabank is the development of agricultural products, as agriculture itself is the driver for the economic development of Ukraine. We’ll continue working in this direction and are currently fully implementing the strategy of the bank.”

How digital identity will shape a more inclusive and sustainable global economy with Stephan Wolf, CEO at GLEIF