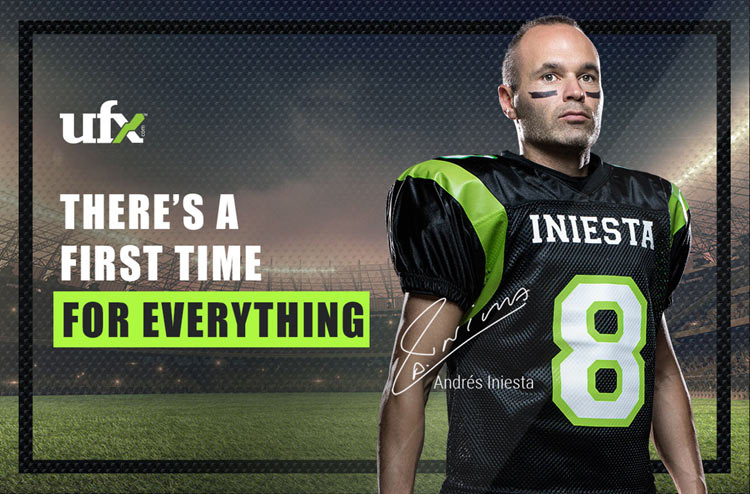 Andrés Iniesta is used to tearing soccer defences apart, but the Barcelona playmaker shows there’s a first time for everything as he dodges American Football defences in the new UFX.com commercial. Leading online broker UFX.com has today revealed its new ad campaign with the aim of encouraging viewers to ‘try something new’, which sees brand ambassador Andrés Iniesta in a different role as he takes on a team of American Football giants in a packed stadium.

Iniesta and his teammates are given a motivational team talk by their coach before the Spaniard takes control and acrobatically skips past the despairing defence to score an astonishing touchdown, showing that there’s a first time for everything – even for superstars.

The latest commercial has been developed as part of the new ‘there’s a first time for everything’ campaign by UFX’s creative team and Creative Lab from House of Facebook.

Dennis de Jong, Managing Director of UFX.com, said: “Encouraging people to try something new is the spirit of this campaign, and we feel AndrésIniesta captures this perfectly in the commercial.

“We took Andrés– an expert in his own field – and threw him into an environment that was new and presented him with a completely different challenge, where he came alive and embraced his role.

“The same principles apply in trading, and we want to inspire people to follow similar values that Andrésuses in football – determination, excellence and devotion – which can help them to try something new and exciting.”

Speaking of the new commercial, UFX Ambassador Iniesta said: “I was thrilled to be a part of the latest UFX ad campaign. It’s always great to be able to try something new and I hope it encourages people to do the same – there’s a first time for everything.”

Andrés Iniesta signed a two-year contract with UFX in July 2017, with an option to extend to a third year. The Barcelona captain has been an integral part of the broker’s campaign and marketing efforts to reach a wider global audience