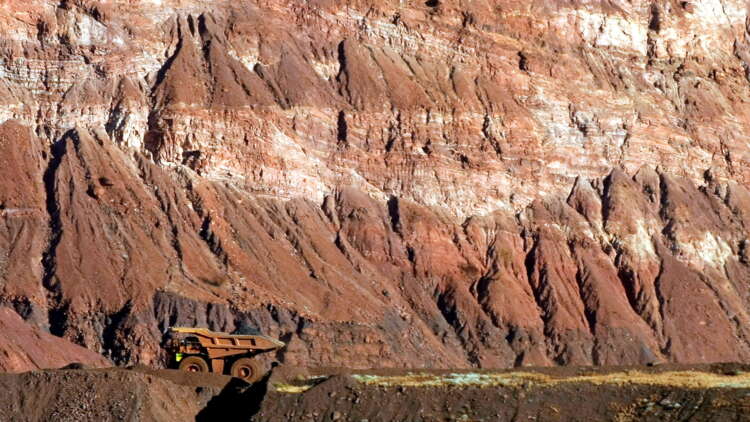 (Reuters) -BHP Group on Tuesday posted a near 5% drop in first-quarter iron ore output due to maintenance work at its Jimblebar mine and a shortage of rail labour caused by COVID-19 border restrictions.

But the world’s largest miner left its annual production outlook unchanged, unlike rival Rio Tinto which last week cut https://www.reuters.com/business/rio-tinto-cuts-2021-iron-ore-shipments-forecast-labour-squeeze-2021-10-14 its shipments forecast because of the tight labour market.

The crunch had led to Rio and BHP asking train drivers https://www.reuters.com/business/australias-iron-ore-miners-face-train-driver-shortage-amid-covid-lockdowns-2021-07-21 to work more hours, as strict border restrictions impacted the flow of workers who tend to live in cities and fly in and fly out of remote mine sites.

There are also demand concerns stemming from a debt crisis in the Chinese property market, which along with Beijing’s stricter emission controls, have halved iron ore prices from a record peak in May.

BHP shares have sunk by around a quarter since the company posted its best annual results https://www.reuters.com/business/energy/bhp-sell-oil-gas-business-woodside-2021-08-17 in nearly a decade in August, where it also laid out plans to scrap its dual-listed structure and exit petroleum as part of a shift toward “future-facing commodities”.

Its stock was down 1.5% on Tuesday in a weaker overall market.

Iron ore production from Western Australia on a 100% basis fell to 70.6 million tonnes (mt) in the three months to September, from 74 mt a year earlier. But it was higher than a 68 mt forecast by RBC Capital Markets.

Output at the petroleum business, which is set to be bought by Woodside Petroleum, rose 3% to 27.5 million barrels of oil equivalent.

Metallurgical coal output dropped 9% to 8.9 mt, while thermal coal production jumped 17% to 4.2 mt. An acute global shortage of coal, including in China https://reut.rs/3BRV2w6, has driven a surge in the commodity’s prices and caused power outages.