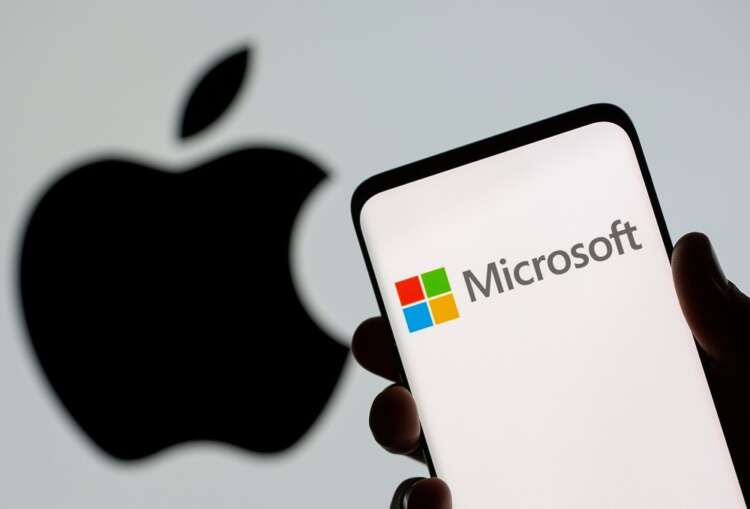 (Reuters) – Apple Inc is set to lose its crown as the world’s most valuable public company to Microsoft Corp if the iPhone maker’s shares continue their downward slide when the market opens on Friday.

Apple took a $6 billion hit to sales during the fiscal fourth quarter due to a nagging global supply chain problem, leading to a miss on Wall Street expectations. Top boss Tim Cook said the impact will be even worse in the current holiday sales quarter.

Apple, which has repurchased $421.7 billion over the years, had announced a massive $90 billion share buyback in April. As a result, the company’s outstanding stock pool keeps shrinking, ending its fiscal fourth quarter with 16.4 billion shares.

Microsoft’s stock has surged more than 45% this year, with pandemic-induced demand for its cloud-based services driving sales. Shares of Apple have climbed 15% so far this year.

Apple’s stock market value overtook Microsoft’s in 2010 as the iPhone made it the world’s premier consumer technology company. The companies have taken turns as Wall Street’s most valuable business in recent years, with Apple holding the title since mid-2020.

Analysts say Apple has managed the supply chain issue well, but with Cook warning of more pressure, the door is open to a hit to its performance as the holiday season kicks in.

In contrast, Microsoft on Tuesday forecast a strong end to the calendar year thanks to its booming cloud business, but it warned that supply-chain woes will continue to dog key units, such as those producing its Surface laptops and Xbox gaming consoles.

(Reporting by Subrat Patnaik and Sruthi Shankar in Bengaluru; Editing by Bernard Orr and Saumyadeb Chakrabarty)

How Friction Can Improve Your Customer Experience