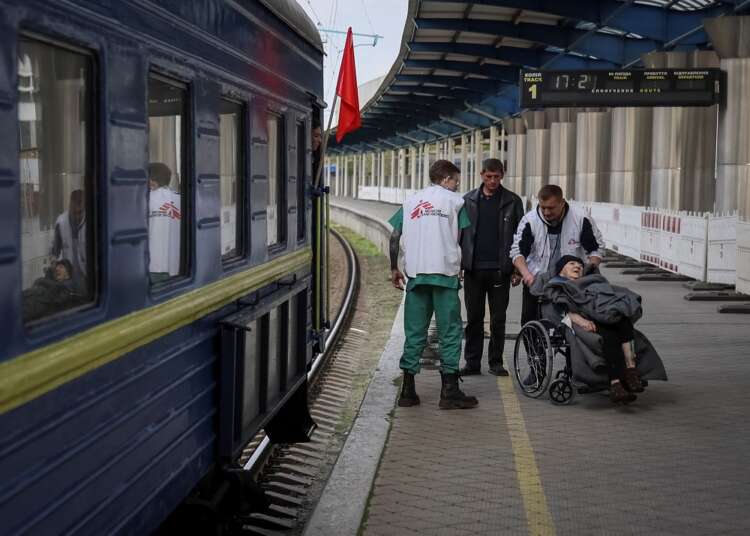 GENEVA (Reuters) -The World Health Organization assembly passed a motion on Thursday condemning the regional health emergency triggered by Russia’s invasion of Ukraine and rejected a rival resolution from Moscow that made no mention of its own role in the crisis.

The original proposal https://apps.who.int/gb/ebwha/pdf_files/WHA75/A75_ACONF6-en.pdf, brought by the United States and some 50 others, condemned Russia’s actions but stopped short of immediately suspending its voting rights at the U.N. health agency as some had earlier sought.

Both resolutions expressed “grave concerns over the ongoing health emergency in and around Ukraine”, but only the Western-led proposal says the emergency is “triggered by the Russian Federation’s aggression against Ukraine”.

Ukraine’s ambassador to the United Nations in Geneva Yevheniia Filipenko called Russia’s counter-proposal a “twisted alternative reality”. “The Russian Federation has failed in its cynical attempt to deceive this forum,” she said of the outcome.

Russia’s deputy ambassador to the U.N. in Geneva Alexander Alimov called the Western proposal “politicised, one-sided and biased” versus its own “constructive” proposal https://apps.who.int/gb/ebwha/pdf_files/WHA75/A75_ACONF8-en.pdf. “Manipulating the WHO is not acceptable,” he said of the result.

China supported Moscow in the two votes, with its envoy Yang Zhilun saying the WHO was the wrong forum for discussing Ukraine’s health problems.

The twin votes, rare in WHO meetings, are unlikely to have an immediate impact on the conflict but are seen as an increasingly rare multilateral endorsement of Kyiv’s position more than three months after the Feb. 24 start of Russia’s invasion.

But while the Western-backed proposal passed with 88 votes for and 12 against, it was not resounding and there were dozens of abstentions and absences among the WHO’s 194 members.

WHO Europe member states have already passed a resolution that could result in the closure of Russia’s regional office.

Diplomats said this time they were wary of pushing Russia too far and prompting it to quit, given the need to cooperate with WHO on disease surveillance. Support for political condemnations of Russia has also faded, they said, with Western countries seen by some as too narrowly-focused on targeting Russia at the expense of other issues.

The resolutions come alongside a report from WHO Director General Tedros Adhanom Ghebreyesus, which highlights the “devastating” health consequences of the Russian invasion, including 235 attacks on healthcare as well as wider mass casualties and life-threatening disruptions to health services.

Moscow calls its actions a “special military operation” to disarm Ukraine and rid it of what it calls anti-Russian nationalism fomented by the West. Ukraine and the West say Russia launched an unprovoked war of aggression.

No work and nowhere to live: a rural migrant’s ordeal in locked-down Shanghai