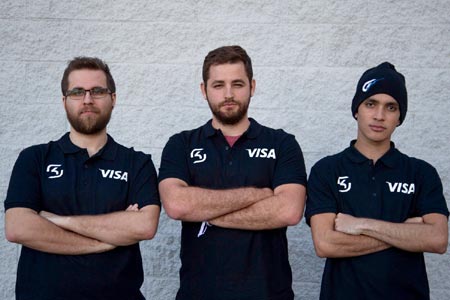 Hot on the heels of its successful partnership with Formula E, the all-electric street racing series, Visa today continued their support of innovative business with the announcement of an historic sponsorship deal with Europe’s premier eSports team, SK Gaming.

The deal, signed for an initial period of 12 months, will see Visa give financial backing to the Cologne-based team as they aim to continue their dominance of the international rankings and retain their position as world champions of Counterstrike: Global Offensive in 2017.

As part of the sponsorship agreement, Visa and SK Gaming will work together to create behind–the-scenes content at events such as the Visa Vegas eRace to be hosted across the team’s social channels, with a cumulative reach of nearly 6 million enthusiastic gaming fans.

The announcement at the Consumer Electronics Show (CES) in Las Vegas ahead of their title sponsorship of the Visa Vegas eRace, complements the company’s partnership of another pioneering company, Formula E and its expanding venture into the eSports world.

Commenting on the sponsorship, Suzy Brown, Director of Sponsorships and Partnerships at Visa said:

“Pro gaming has added a new dimension to sport, increasing access to people the world over and creating a surge in its popularity. We see huge potential and this deal sees Visa ideally placed to be part of the fast paced growth, and by putting ourselves at the heart of the action we can build affinity with millions of millennial gaming enthusiasts and confirm our position as a global innovator.

We’re looking forward to a successful season supporting the next-gen athletes at SK Gaming to do what they do best – win.”

This partnership is truly a historic step for SK Gaming. The fact that Visa picked us as their partner to enter eSports makes everybody at SK Gaming proud.

For us the partnership is a great start into 2017 and proves that all the hard work our players put in is getting recognized beyond just the gaming world. With their recent partnership with the Formula E, Visa has shown that they are committed to support the sports of the future. I am looking forward to some amazing events for our fans in the upcoming months and I am sure the new season will be even more successful than the last one.