UPDATE ON THE PORTUGUESE ECONOMY

The latest indicators reported for the Portuguese economy show a more positive evolution, which resulted in an improvement in most confidence and activity indicators, after reaching historical lows in the end of 2012 and early 2013.

We also note that the more positive performance of the Portuguese economy takes place at the same time European economies, particularly the Euro-Zone, also present a less negative framework, as reflected in the GDP numbers of the 2Q13 (+0.3% quarter-on-quarter basis), which was in line with official estimates like the ones presented by the ECB that considers that the European economies could recover gradually in the second half of this year and in 2014, supported by an accommodative monetary policy.

The Bank of Portugal and INE (Statistics of Portugal) recently published the economic indicators for September 2013 including the latest data for the Portuguese economy. According to the data published by INE, the Portuguese GDP grew 1.1% during the 2Q13 (QoQ basis) after 10 consecutive quarters with negative performances. On a YoY basis, Portuguese GDP recorded a negative change (-2.1% in 2Q13), but showed some improvements compared to the figures of the previous quarters (-4.1% YoY in the 1Q13).

The positive performance of the Portuguese GDP in the second quarter was largely explained by a less negative contribution of private consumption, investment, and an acceleration of the growth of Portuguese exports of goods and services.

It should be mentioned that, according to the Bank of Portugal, the coincident indicator of economic activity for August declined -0.5% YoY, compared with -1.0% for July and -2.1% on January of 2013. But although this indicator kept its negative value, it also improved since the beginning of 2012. With similar developments we see that the indicator for economic sentiment performed well during last few months. 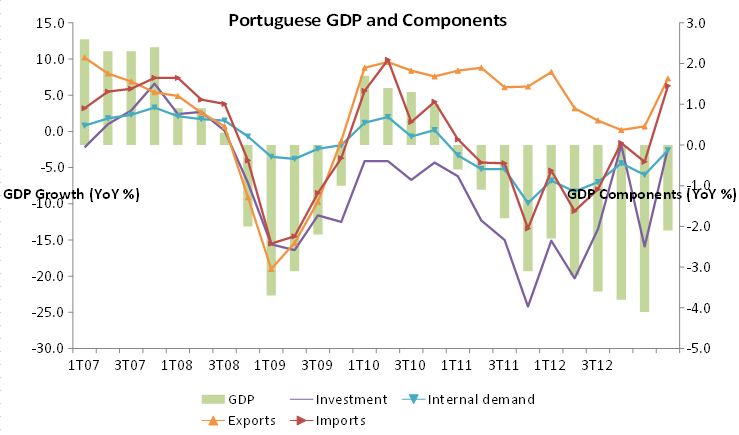 The coincident indicator of private consumption during the second quarter also improved and stood at -3.3% (-4.3% in the previous quarter), which was reflected in the retail business data that declined less in the same period.

On the investment side, the indicator that measures that component of GDP remains negative (-10.0 points in June), but less negative than previous figures reported during the first quarter. We highlight the positive values related with investment in transportation equipment. An example of the improvement in investment is the positive performance on sales of light commercial vehicles, which showed a 9.0% growth in the second quarter of 2013 and 9.8% in the quarter ended in August.

We also highlight a more positive background regarding external demand, which has supported GDP growth during the second quarter. Domestic exports of goods (by value) in the three months ended in June grew by 6.3 % compared to the figures of the same period of 2012, while imports rose 2.1%. We highlight the positive performance of Portuguese exports to Spain (+11.6%) as well as to countries outside the EU (+13%).

The International Monetary Fund, European Commission and European Central Bank (Troika) recently concluded the eighth and ninth assessment of the Portuguese Economic Adjustment Programme. The targets related to the budget deficit for 2013 and 2014 are kept unchanged, respectively in 5.5% and 4.0% of GDP. In the last Assessment of the Portuguese Economic Adjustment Programme, the estimates for GDP growth have been revised up slightly. Thus, for 2013 is now estimated a decline in GDP of 1.8% (-2.2% before), benefiting from a positive behavior of GDP from the second quarter (+1.1% QoQ) and the estimates for 2014 are now of +0.8%.

In the last regular assessment to the Economic Adjustment Programme for Portugal, the Troika concluded that, despite the necessary adjustments, the program is being implemented successfully. In general, all performance criteria and structural benchmarks underpinning the review have been met. More broadly, there has been strong progress in reducing economic imbalances, some two-thirds of the 10 percentage points of GDP structural primary adjustment required to stabilize public debt has been effected and the current account deficit has narrowed sharply. Partly reflecting these developments as well as the demand by yield, Portugal was able to start its return to the international bond market for the first time since 2010.

Between 2011 and 2013, the Portuguese economy has moved from a situation of net external financing needs of about 10% of GDP to a surplus of 3%, according Economic Bulletin Autumn disclosed by Bank of Portugal, which is one of the most remarkable features of the adjustment process of Portuguese economy.

It’s important highlight that the focus of the Portuguese Government since June 2011 has been the implementation of the Economic and Financial Adjustment Programme signed with the Troika in May 2011, which had three main pillars:

The fulfillment of these main pillars is essential for the country to be able to establish its credibility and resume full access to credit markets at acceptable costs.

TOP WAYS TO INVEST YOUR MONEY

the PIHL bankruptcy – and its impact on foreign investors and contractors