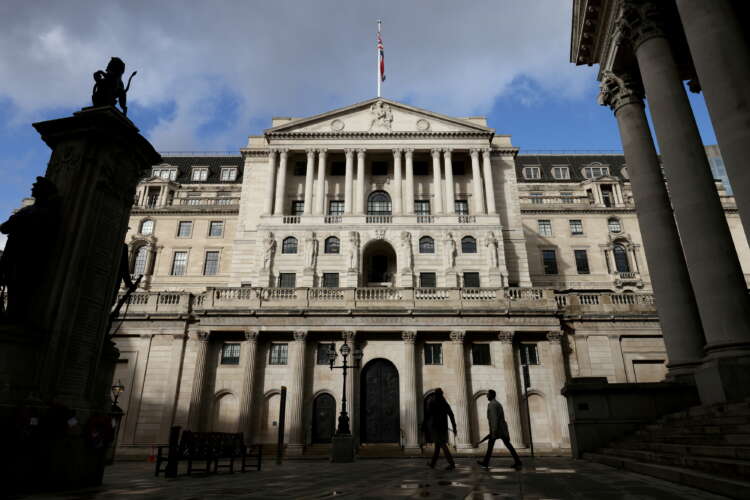 LONDON (Reuters) -British companies are struggling to find the staff they need and expect higher inflation in the year ahead, according to a survey published on Thursday by the Bank of England, which is weighing up whether to raise interest rates this month.

The BoE’s monthly Decision Maker Panel survey of nearly 3,000 businesses showed 85% of firms were finding it harder than normal to recruit new employees, and 58% reported it was much harder.

The survey also found businesses expected inflation in one year’s time to be 4.2%, up from 3.9% in the October survey and the same as the most recent official inflation reading.

But business uncertainty was the second-lowest since shortly before the coronavirus pandemic hit Europe, with 48% of firms judging it ‘high’ or ‘very high’.

Companies were surveyed between Nov. 5 and Nov. 19, before news emerged of the new Omicron variant of COVID-19, which has dented expectations in financial markets that the BoE will raise interest rates on Dec. 16, after its next meeting.

Markets see an almost 60% chance of a rate rise this month, compared with close to 100% in the run-up to November’s meeting when the BoE wrong-footed many investors by choosing to wait for more data on the health of Britain’s job market.

Separate data from the Office for National Statistics showed the volume of online job ads in the week to Nov. 26 was 46% higher than in February 2020, before the start of the pandemic, up 2 percentage points from a week earlier.

But only 15% of firms in the ONS survey said they were short of workers – much lower than the similar question in the BoE survey – rising to 37% when small businesses with fewer than 10 staff were excluded.

The BoE is likely to focus more on official labour market data due on Dec. 14 which will give the first jobless data for the period after the end of the government’s furlough programme on Sept. 30.