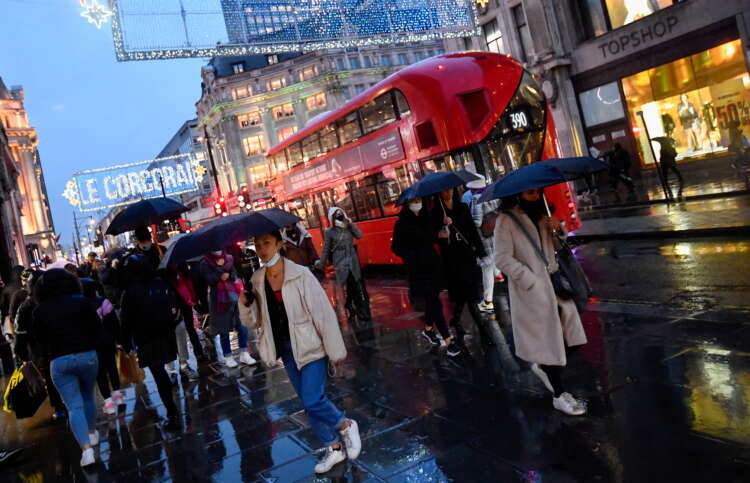 LONDON (Reuters) – British consumer spending picked up in November, boosted by earlier-than-usual Christmas shopping and a recovery in spending at pubs and restaurants before news of the Omicron variant of the coronavirus, industry surveys showed on Tuesday.

The British Retail Consortium, a trade body representing major high-street retailers, said total sales in November were 5.0% higher than a year earlier, the biggest annual increase since July and up from an increase of 1.3% in October.

Separate credit and debit card data from payments provider Barclaycard showed consumer spending – which includes things such as eating out and travel, as well as shopping – was 16.0% higher than in November 2019, before the pandemic.

Consumer demand has been fairly resilient in Britain through the pandemic, as household incomes were supported by government measures. But there have been big shifts within sectors – with a large chunk of retail spending moving online, and only partly reversing when shops reopened.

Travel remains depressed, with spending on plane tickets 22.1% below its level two years ago. Restaurant spending was 4.3% down compared with November 2019, compared with an 8.3% shortfall in October, Barclaycard data showed.

Overall non-essential spending grew at its fastest rate since the start of the pandemic, up 17.7% from two years before.

However, economists forecast that households’ disposable income will become increasingly squeezed in coming months as inflation picks up further and payroll taxes rise from April, complicating the task of the Bank of England which is due to consider whether to raise interest rates next week.

“As people prepared their wardrobes for the cold weather this winter, consumers took advantage of discounted clothing, shifting the focus of Black Friday from just electronics and household appliances,” she said.

Like-for-like sales, a measure which adjusts for changes in retailers’ floor space, were 1.8% higher than a year before, compared with a 0.2% drop in October.

Four in 10 consumers surveyed said that they were doing their Christmas shopping earlier than before, Barclaycard said.

“The arrival of Christmas markets and lights across the UK brought some festive cheer to the retail, leisure and hospitality sectors in November, while the return of darker nights and colder evenings saw Brits spend more on at-home pursuits,” Barclaycard executive Jose Carvalho said.